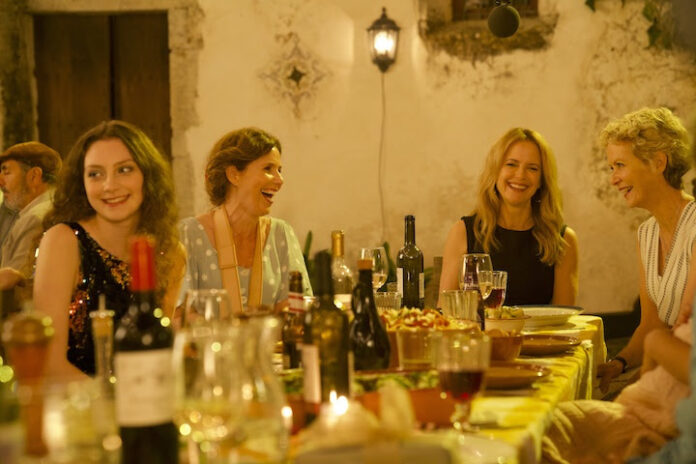 Three estranged best friends in their 50’s are reunited when their fourth best friend Anna, from their college years, has passed from breast cancer.  Kate (Jenny Seagrove, Local Hero, Another Mother’s Son, Don’t Go Breaking My Heart), Liz (Sally Phillips, Bridget Jones’s Diary) and Cassie (the late Kelly Preston, For The Love of The Game, What a Girl Wants, Jerry Maguire) have grown apart over the years with work, families, and a bit of drama that has led to their estranged friendships and personal struggles over the years. Judy Dench (Philomena, Shakespeare in Love, Victoria & Abdul) makes a cameo appearance as Anna’s mother who is happy that her daughter’s (Anna) friends showed up to the funeral but was quick to lay down the disappointment of their falling out. She passes Anna’s last wishes to her group of long time friends and with that, the adventure begins.

Off the Rails is directed by Jules Williamson (See No Evil, Tattoo) and is a wonderfully touching film that pulls at the heartstrings and punches the gut to realities of ageing women. Kate, Liz, and Cassie must recreate their post graduation trip across Europe to honor the memory of their dear friend Anna. Joining them this time around will be Anna’s 18 year old and only daughter, Maddie (newcomer Elizabeth Dormer-Phillips). Together, they will fulfill Anna’s last wishes but their journey turns out to be more challenging than expected. They have five days to get to Palma to catch what they’ve dubbed, “God’s Disco Ball”.  A twice yearly occurrence of when the sun shines through the town’s cathedral stained glass window; an event they missed on their postgraduate journey.

While traveling through Paris, Spain, and Italy each woman encounters lost passports, train strikes, romantic entanglements, and other hurdles that get in their way. Old feuds come back to light and each is faced with turmoil that stray them from their venture. They have met a possible love interest, Ben Miller (Paddington 2, What We Did on our Holiday) and mayor of a rural Spaniard town, Franco Nero (Django Unchained, John Wick: Chapter 2), along their way who end up being helpful in their quest. In the midst of their falling out, Maddie takes off to Palma on her own to see the ‘dancing lights’ and fulfill her mother’s dying request. Liz, Kate, and Cassie must put aside their differences, connect with Maddie, and also, fulfill their late friend’s dying wish.

Off the Rails is the kind of film that will largely appeal to older women. Being close to their age, I totally understand the amount of shit that may have been going through their brains and hearts as we hit this next level milestone/conundrum in our lives. I can’t imagine what must have been going through Kelly Preston’s soul as she was filming knowing she was battling breast cancer too. It’s not raunchy like Bridesmaids and although Mamma Mia-esque, the film doesn’t include song & dance nor over the top circumstances. There are cute and heart filled moments, especially those that I certainly will do with my daughters when they are old enough. For memory’s and female legacy’s sake. Other moments are the gut wrenching truth of what women at this age face and endure that I think are often overlooked or deliberately passed over because of ageism and sexism. There aren’t a lot of laughs or wild and off the wall scenarios but a film focused more one female bonding and triumph. Makes you not want to carry your internal burdens to the grave and with that being said; it’s definitely worth a watch.

Off the Rails is available in theaters and VOD now.