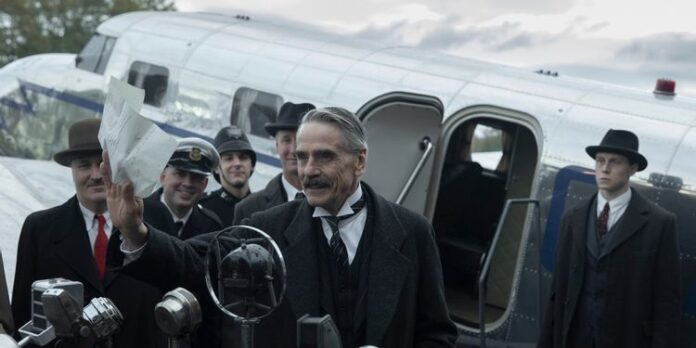 Following his incredible performance in 1917, George MacKay is headed to a different kind of battlefield in Munich: The Edge of War. The British actor plays a diplomat who comes face-to-face with Adolf Hitler as the dictator prepares to attack Czechoslovakia. Also in the cast is Jeremy Irons, who plays British Prime Minister Neville Chamberlain, the infamous “appeaser” himself, as he prepares to do whatever the Third Reich demands in order to avoid war. The result? World War II, so his plan obviously failed.

Ben Power adapted the screenplay from a book by author Robert Harris.

Adapted from Robert Harris’ novel Munich, MUNICH – THE EDGE OF WAR sees two young men embroiled in one of the most crucial moments in 20th Century history. In the autumn of 1938, civil servant Hugh Legat accompanies British Prime Minister Neville Chamberlain to Munich in a desperate bid to broker peace with German leader Adolf Hitler. Once there, Legat encounters his old friend Paul von Hartmann, a German diplomat who has in his possession a document signaling Hitler’s true intent: a war of conquest across Europe. Amid frantic negotiations at the Munich Conference, Hugh and Paul conspire to prevent a terrifying conflict.