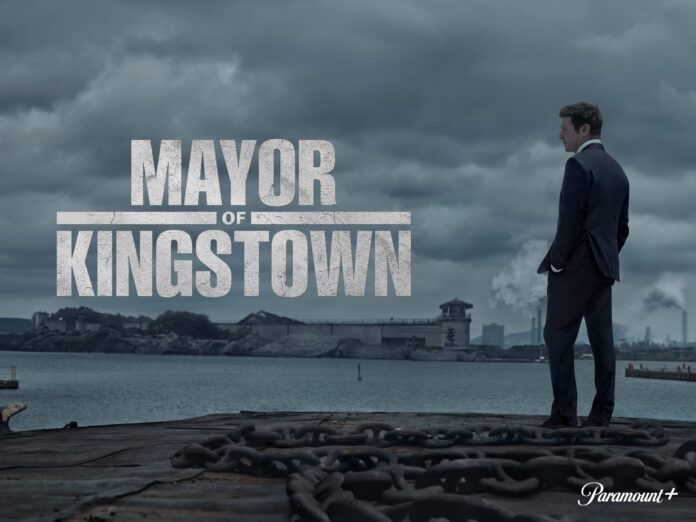 First off, if you’re looking for fun action for the whole family, you’re going to want to hold out for Jeremy Renner’s other streaming series Hawkeye. Mayor of Kingstown the new Paramount+ series by Taylor Sheridan and Hugh Dillon, is a story that needs to be told but one for which you need to be emotionally prepared. The series takes place in Kingstown, Michigan, home to 7 “for-profit” prisons, one of the most disgusting industries at work today. I’m not kidding, this prison industrial complex has led to headlines that make no sense, like “Local prison will be forced to close if it doesn’t fill more beds”. Yeah, I don’t see how that could go bad. It’s not like people will do anything for money, so incentivizing an entire industry to arrest and incarcerate more people must be great for society. It’s not just the prison owners and staff though, like any big money maker side gigs are bound to pop up, it’s in this area that Mayor of Kingstown lives. 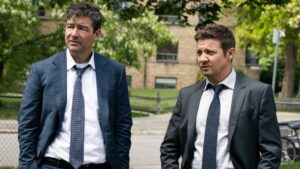 Mike (Jeremy Renner) and Mitch McLusky (Kyle Chandler), brothers whose business is acting as liaisons for those inside. You know what, that definition doesn’t do it justice as their role is not easy to nail down, a fact that’s highlighted when watching Mitch explain his work in the series opener. Think of it like this, in a swirling hurricane of cops, robbers, justice and crime Mitch and Mike are the fixers living at the eye of the storm making sure everything is in its proper place. When the series opens the older of the two, Mitch, is the so-called “Mayor” of Kingstown…a title even used by the actual mayor of the town, in case you weren’t convinced at the level of corruption going on here. Rounding out the family is little brother Kyle (Taylor Handley), a police detective, and their mother Miriam who works at the women’s prison and is thoroughly disgusted by the family business. If you’re feeling tinges of The Wire, Oz, and/or Sons of Anarchy you’re not far off the mark for the general feel of the series. 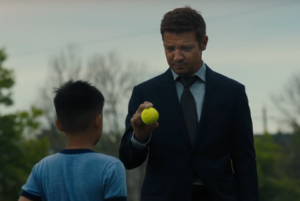 I have a lot of hope for Mayor of Kingstown, partly because I’m an unabashed fan of Jeremy Renner but mostly because I feel they have the pieces in place for one hell of a story by the time it’s all said and done. I make it a point to say this because you may find it hard to stay onboard with the show after the first few episodes. Mayor of Kingstown makes a great argument for the binge release method as opposed to weekly episode by episode releases.  If you’re show takes a bit to get started or holds back details and/or essential reveals for later on down the road, your best bet is an all in one release shot…sometimes that week is enough to lose a viewer. In this show’s case it seems more like the world building being done is going to be spread out through the first season. The first episode especially can be somewhat hard to follow, there is SO much going on with no context as to what everyone’s role it. Even the McClusky’s, it’s not fully clear where they lie in the events unfolding. This issue spreads out in most aspects of the show, even right down to the dialogue, you’re not going to get a lot of the slang being thrown about until you’ve lived in this world a bit. Thankfully the “problem of the week” structure of the first 3 episodes makes it so that you can easily follow along with at least that much while you collect world details for the future episodes.

That all being said, I’m confident that by episode 6 or so these concerns will be forgotten, and viewers will be entrenched in what is playing out. Renner, who usually plays the snarky, sarcastic tough guy is equally able to nail a role like this where the humor is absent and all that’s left is a cold, dark, time bomb waiting to explode. The fact that he’s supported by real talent with names like Diane West, Taylor Handley, and Aiden Gillen (who I pray factors in much more then he did in the first three episodes) only cements my thought that this is on the right path. The grit and honesty with which the story is told, having no shortage of language, nudity, and violence, promises a series that feels as street level as those aforementioned iconic crime dramas that came before it. Lastly, if you’re worried that this may be a show that plays it safe, I can promise you that by the end of episode 1 that fear will be erased.

Mayor of Kingstown releases new episodes every Sunday on Paramount+. Episodes 1 and 2 are available now!