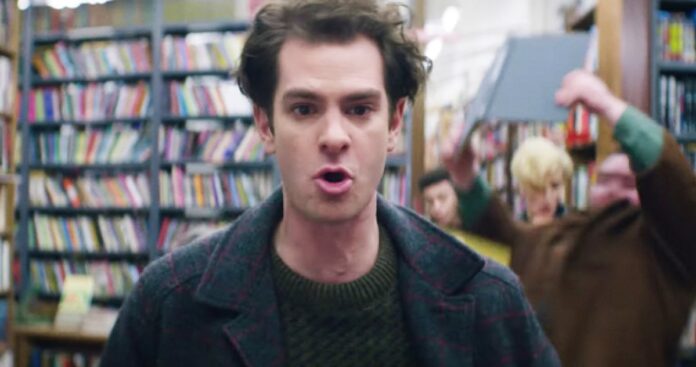 The last year has been particularly tough for the theatre community. As Broadway has been dark due to COVID, it’s made especially difficult for performers a career path that is famously tough to navigate. How many movies are there about struggling stage actors and playwrights? Many of them owe something to Jonathan Larson’s tick, tick…BOOM!, the revered Rent creator’s exasperated ode to that struggle, his fear of growing old and washed up by the age of 30, and pain of losing so many friends to AIDS. Larson himself would die suddenly at the age of 35 on the eve of Rent‘s first preview night. His legacy looms large and clearly weighs on director Lin-Manuel Miranda, who has crafted a joyous, roaring tribute that couldn’t have come at a better time for theatre lovers who have been so bereft for so long. While Miranda’s directorial debut is a pretty big deal in itself, the plaudits will surely come for tick, tick…BOOM! star Andrew Garfield.

Garfield dazzles in capturing Larson’s existential angst, early midlife crisis, and boundless confidence in what must have been a very challenging role. Early on, a partygoer asks Larson what he does and his response is “I’m the future of musical theater.” It would sound like a joke coming from anyone else, but not Larson. Set in 1990 just a few days shy of Larson’s 30th birthday, he’s being crushed by the weight of deadlines and expectations. He’s due to present the first showcase of his futuristic rock opera Superbia, which is crucially missing a second act song. Like so many starving artists out there, Larson waits tables at a busy diner but longs to focus on his craft. He can’t give up on the dream like his best friend Michael (Robin de Jesus) did to become a hotshot advertising exec. At the same time, Larson has a big decision to make regarding his ex-dancer girlfriend Susan (Alexandra Shipp), who supports his dream but needs a little bit of that same respect coming her way.

Inescapable is the presence of legendary playwright Stephen Sondheim (played by Bradley Whitford), who made it big by the age of 27 so Larson is already behind the eight-ball. A pretty good example of Larson’s massive ego, and the anvil of burden he placed on himself, just comparing his upstart career to Sondheim’s. But part of the film’s appeal is that it isn’t the tired old formula of artistic success, but of Larson’s artistic discovery. Throughout the many catchy tunes and clever numbers, Larson’s distant, rather silly sci-fi musical overtakes his life even as we know it’s not the project he’ll ultimately become famous for. We know that one’s a dud. And without spelling it out, we see the components of his life that will emerge as priorities and later inform his work, not only in the production of tick, tick…BOOM but with Rent.

And so the film is an unusual journey, especially for those unfamiliar with the source material. Although Garfield himself is intensely likable, Larson is the kind of self-involved self-proclaimed genius we know needs a good wake-up call. Miranda and writer Steven Levenson do a great job of exposing Larson’s many flaws, and the personal cost of his singular focus on the art. His close-knit friendship with Michael frays, especially after a hilariously heightened bit where Larson takes a job as part of a focus group peddling a disgusting fat substitute. Here, Larson grapples with his obvious talent at coming up with catchy slogans and jingles, a skill that could give him a comfortable life. But would it make him happy? The pull between art and commerce weighs heavy. Larson also begins to push Susan away, prioritizing the work over their shared connection.

It’s easy to see Miranda seeing a lot of himself in Larson, and the pressure of being a fresh-faced wunderkind who would shake up the industry. The contours of a passion project are everywhere, both the good and the bad. On the upside, Miranda’s debut feature retains a boundless playful energy throughout, including a bumpin’ ’90s hip-hop interlude by The Roots member Tariq Trotter aka Black Thought. You can see Larson’s influence, from a rhythm and cultural diversity standpoint, in everything Miranda has done throughout his career. Miranda is best when given the room to indulge in cinematic flourishes, as seen in the number Boho Days, the camera zipping through Larson’s shabby, over-crowded apartment. As Garfield zips and darts between a room full of his co-stars, he exudes the endless charm that Larson had to convince people that maybe he really is the future of stage musicals, after all.

If this were a simple stage production it would probably come easy for Miranda, but as a filmmaker he must find also find a way to use the chosen medium to its fullest. I’m not completely convinced he does that, framing the film confusingly around a staged workshop in which Larson is joined by singers Roger and Karessa (Joshua Henry and Vanessa Hudgens, both voices booming over Garfield’s), while adding a handheld camera aesthetic that intrudes into contemporary scenes at unusual moments. Like so much in tick, tick…BOOM it will make instant sense if you are a Larson devotee. The same goes for a fan-servicey bit during the tremendous rendition of “Sunday”, in which a crowded weekend brunch also becomes home to a veritable Murderer’s Row of popular stage favorites. You’ll need to see the film multiple times just to catch every single reference, every single cameo. It’s all quite a lot of fun and also very distracting, giving the impression that Miranda is flexing his Rolodex’s muscles a little too much. Even the minor role Miranda leaves for himself will have you looking at it sideways like “You just couldn’t help yourself, couldja?” By comparison to the dazzling direction by Jon M. Chu on In the Heights, I’d be lying if I said Miranda’s compares. He’s still growing as a filmmaker, and part of that growth will be shedding a tendency towards staginess.

Larson’s tick, tick…BOOM has taken many forms on the stage, and now Miranda has developed his vision of it for the screen. Given the gigantic impact Larson had on a good many playwrights and filmmakers, there will undoubtedly be others. But what’s special about this one that Miranda has created is the pure love and admiration everyone involved has for Larson, both the man and what he would come to represent. The show’s title suggests that Larson’s time to be a success was running short before everything would explode. While it would sadly prove prophetic, Larson’s time is far from over because he fought so hard to leave his mark on the world and the art that he loved more than anything. Tick, tick…BOOM can be melancholic and a little bit scattered, but it is ultimately a round of applause for a man who never got to bask in the glow of his immense success.

Tick, tick…BOOM! is in select theaters now, and Netflix streaming on November 19th.