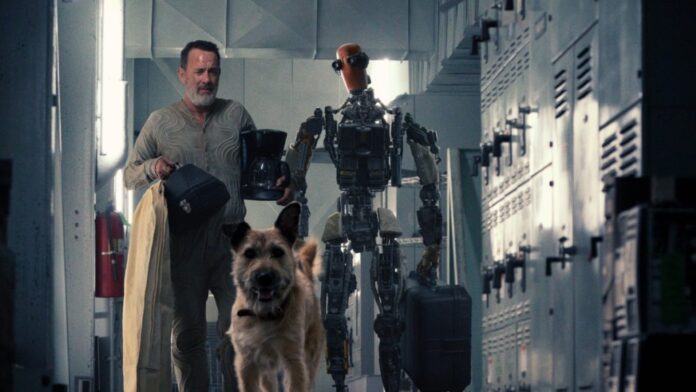 From crossing the Old West in last year’s great News of the World, to traveling the West in Miguel Sapochnik’s sci-fi film Finch, Tom Hanks is telling stories and imparting life lessons across time and space. And you know what? He’ll never not be compelling and the kind of fatherly presence that keeps us receptive to his wisdom, even when the movie leaves much to be desired. Finch isn’t especially bad or anything. It’s a perfectly fine, comfortable movie and that’s entirely the problem. It doesn’t aspire to much, and even Hanks seems to be phoning in a role that he can do in his sleep.

Remember back in the ’80s when everyone was terrified about the thinning ozone layer? Scientist and inventor Finch Weinberg (Hanks) is living through the thing we were all worried about happening. A solar flare has caused so much UV radiation to penetrate the ozone layer that practically all of humanity has been lost. Finch is one of the few who remains, and in his bunker buried deep in his company’s old lab, he lives a comfortable existence with his dog Goodyear and his robots, in particular a humanoid model (voiced by Caleb Landry Jones) to take care of the canine after Finch is gone. With radiation sickness settling in, Finch knows his time on Earth is running short, but a super-sandstorm forces them from home before the robot is ready.

Forced to hit the road, Finch, Goodyear, and the robot who eventually takes the name Jeff, trek across the country in hopes of reaching the west coast. They aren’t looking for anything in particular, but the journey allows Finch to teach all that he knows about being human, and learns to trust again, something he lost while stewing in his own bitterness and resentment for so many years.

So this is Tom Hanks 101 stuff right here, and the legendary actor is as good as you want him to be. But Finch isn’t the nice guy we are used to seeing Hanks play. He’s gruff, ornery, and frequently takes out his frustration on Jeff who, it must be said, is pretty damned annoying. The robot is understandably naive, and when he talks sounds like someone doing a really bad Borat impression through a voice-changer. What little conflict there is to be found usually comes from Jeff messing something up and endangering his companions. Mother Nature is not on their side; a storm is constantly on their tale. And of course, there’s the threat of other humans, who Finch has us convinced are all a danger and definitely not to be counted on. We find ourselves siding with Finch in his annoyance with Jeff, in part because he’s played by Hanks, and in part because Jeff…well, he sorta sucks. Goodyear is a saint, of course.

You can see aspects of other films that Finch borrows from. There’s a little bit of Wall-E in there, a little bit of The Iron Giant, and definitely some Silent Running, too. But it doesn’t aspire to do much beyond its simple premise. The whole thing operates at a perfectly comfortable, non-threatening level and never pushes the envelope. It is enjoyable enough to be seen, but probably not enough to inspire a lot of repeat viewings. Sapochnik, in his first feature since 2010’s Repo Men and after his Emmy-winning direction on HBO’s Game of Thrones, keeps the film moving at a gradual pace but you wish there was more to get excited by. Finch is a movie where Hanks is surrounded by a chatty robot and a loyal pooch. The heartwarming nature of it is pretty much baked in already, and for some people that will be reason enough to check it out on Apple TV+. Once.

Finch will be available on Apple TV+ beginning November 5th.