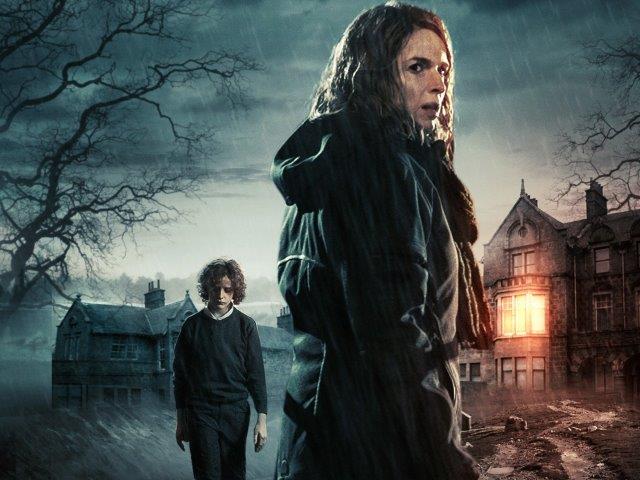 There could be a few comparisons between Marionette and The Sixth Sense. Both films deal with a psychologist with their own issues in regards to their past and trauma with their own family life. Both films also have the psychologist have to treat a creepy kid who seems to have some otherworldly abilities in the realm of the supernatural. Finally, both films also have very mind-blowing heady endings. While a bird’s eye elevator pitch would say that Marionette is trying to ape M. Night Shyamalan’s classic film, they are distinct films in both the subject matter, as well as the execution by writer-director Elbert van Strien.

From the opening scene of Marionette, we see a man (Peter Mullan) climb to the top of a tower at a psychiatric hospital muttering quietly before lighting himself on fire. Later on in the film we get to learn exactly why he did what he did, and it’s all related to one of his patients. His replacement and our hero is Marianne (Thekla Reuten), a child psychiatrist who has recently moved to Scotland for a job at the facility. American-born Marianne decided to leave the States and come to Scotland to get away from her own problems she thought she left behind.

Her work is cut out for her as she is introduced to her new patient Manny (Elijah Wolf). Manny is described as a disturbed child. He doesn’t verbalize with anyone and simply spends all his time drawing dark and disturbing drawings. As Marianne starts her sessions with Manny and he opens up to her, she starts to see that the events that Manny draws in his drawings actually are events that are happening. Can Manny predict the future? Is he some weird God-type of being that can manifest whatever he wants? Or is this all happening in Marianne’s head and she’s getting too deeply involved in her work? As Marianne digs deeper into Manny’s past (as well as trying to get any background information on him from other doctors), she’s getting nowhere, and strange supernatural things are coincidentally happing as well. Her patient problems, as well as her trying to deal with her own personal issues related to the death of her husband, are causing Marianne to also go off the deep end. Is this the same thing that happened to Manny’s previous doctor? Does this child have some ability that causes those trying to pry to go insane?

Towards the end of the film when Marianne’s grasp on reality is shrinking, something happens in Marionette that completely changes the film into full-blown supernatural territory. At first, it’s jarring and confusing, but then as the pieces fall into place, it is fascinatingly brilliant. The twist offers questions into the realm of psychology, theology, and a few other high concept issues. To make it even more interesting Marionette doesn’t ever give a straight answer to the questions it proposes, instead .asks the viewer to come up with their own conclusions as to what’s going on, and what part of it is actually real.

That doesn’t mean Marionette doesn’t have a few hiccups along the way. We aren’t given much of a timeline between when Marianne’s husband’s death and when she goes off to Scotland for her new job. It has to be some time because as soon as she gets there, she’s dating a fellow co-worker in what seems like a few days. In addition, she joins a local book club where many of the existential issues Marionette tries to explore are just plain out discussed as a debate among wine-drinking people in a circle. It’s a little clumsy side plot in regards to execution and works much better when the issues are brought up when Marianne and Manny are having their one-on-one sessions.

Speaking of both Marianne and Manny, the acting is top-notch. Thekla Reuten is great as the lead as she at first is competent and commanding as Marianne, but slowly she becomes unraveled through her interaction with her patient Manny. By the end of Marionette, you genuinely believe that she has lost her mind through all the issues she’s going through. Speaking of Manny, Elijah Wolf is terrifying as the ever so creepy kid with such deep-seated issues that also thinks he’s some sort of God controlling everything. There are so many moments just within his eyes that are authentically creepy. While the film is not “scary” in a sense of jump-scaring you to death, the psychological aspect, especially from how uniquely strange the subject matter is (as well as how good Elijah Wolf is acting-wise), it’s very captivating and a unique thriller.

Marionette is available via On Demand, Cable, Amazon, & Vimeo now.