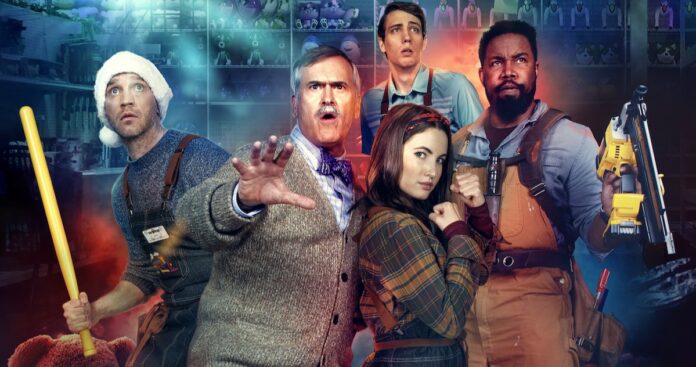 We have horror for every occasion out there in the universe but one often overlooked day that’s begging to be included in that list is that all too familiar day after Thanksgiving that half of us love and the other half dread…I fall in the latter. Anyone who has worked in retail during Black Friday knows what pure Hell dealing with entitled customers can be. Couple that with a parasitic horror falling from the sky, infecting the already frothing masses and you have Casey Tebo’s Black Friday.

Starring Devon Sawa (Idle Hands, Final Destination) as Ken, a broken man in the midst of a divorce and working at “We Love Toys” to provide for his two daughters. Little does he know that while he’s clocking in and preparing to face the angry shoppers looking for a steal, the universe is laying the ground work for a shift he won’t soon forget. Joined by his fellow disgruntled co-workers Ivana Baquero (Pan’s Labrynth), Michael Jai White (Black Dynamite, Spawn), Ryan Lee and the incomparable Bruce Campbell (Evil Dead Franchise) they attempt to survive the night battling infected shoppers that are on a mission to come together and build something…Kaiju-esque.

Both Bruce Campbell and Devon Sawa play their roles perfectly and it seems like they’re having a ball in the process. Bruce as the sleezy inept store manager ready to do whatever needs to be done for that profit and Devon as the low level employee looking to grind out that shift for his Christmas bonus. To me Sawa is one of those actors, similar to Campbell that stands out regardless of what part he plays. I’ve always enjoyed his work from Sean in SLC Punk to Anton in Idle Hands all the way to his protrayal of Dave in Slackers and that definitely doesn’t change with Black Friday. Dude shines in his role as the misanthropic leader of this crazy band of misfits and I’m glad to see him make his way back to the horror/comedy realm.

Now I know there will be critics out there who will knock this for it’s predictability or even it’s cheesy humor but I loved every minute of it. This thinly veiled critique on commercialism is filled with all the gore you’d expect from a horror movie about the worst shopping day of the year and has some amazing practical creature effects to boot. I could absolutely see this movie becoming a cult classic. I know its already made it’s way in to my annual rotation, nestled right between the October staples and those less appreciated Christmas horror titles. No one should go in to this expecting an Oscar contender but if you like your horror kind of cheesy with a little bit of sci-fi thrown in do yourself a favor and catch Black Friday this holiday season, you won’t be disappointed.