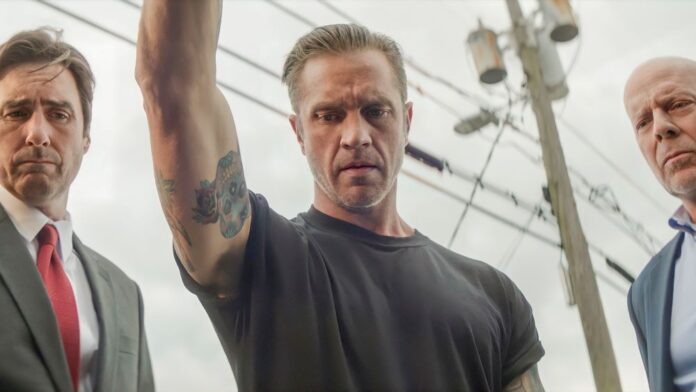 Jimmy Jayne (Devon Sawa) is trying to get his life back on track after his time locked up in Gasoline Alley. He now has his own tattoo parlor named… Gasoline Alley. One evening at a bar across town, Jayne meets Star (Irina Antonenko). Well really Star is a hooker and has Jayne in her crosshairs. After refusing her proposition, Jayne thinks nothing of it. That is of course until Star and 2 other hookers – Giselle (Carrington Durham) and Lana (Hope Golds) wind up dead. And low and behold the little gasoline alley lighter that Star had led the cops right to Jayne’s door. 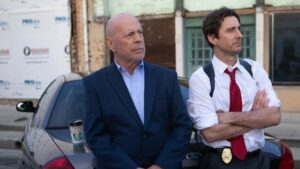 Detective Freeman (Bruce Willis) and Detective Vargas (Luke Wilson) are on the case. They immediately go right into the good cop, bad cop routine. Vargas does most of the talking, and threatening, while Free keeps his cool. Jayne isn’t the most cooperative and quickly realizes he needs to take this investigation into his own hands. Jayne dives into the seedy side of Los Angeles and begins unraveling the mystery. As the bodies keep piling up, Jayne needs to keep friends close, and enemies closer. 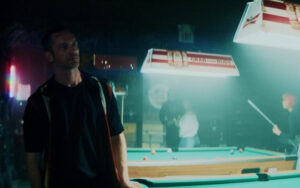 Gasoline Alley is directed by Edward Drake who co-wrote the film with Tom Sierchio. The film is the fifth, yes you read that right, fifth collaboration between Drake and Willis. You know what they say, fifth time is a charm. And after the less than stellar reception of American Siege, Apex, Cosmic Sin, and Breach one would think Gasoline Alley would have to be an improvement. Nope. Eventually studios have to figure that out right? It becomes almost comical how little Drake can get out of Willis. Some grunts, a few lines with no emotion and a strange accent, and that’s pretty much it. Wilson’s performance is much better, but with so little to work with, it was essentially wasted.

Gasoline Alley’s narrative and script become muddled almost right off the bat. A Handful of unmemorable characters are thrown at the audience making it nearly impossible to keep them straight. Everyone has their own motive which is typically unclear, but doesn’t seem to matter. Drake and Sierchio employ flashbacks to try and progress the narrative. Most of them don’t add much to the story. Gasoline Alley had opportunities for interesting twists and turns, but the ones taken did not impress. Drake uses a retro feel to the film. Bluesy music filling scenes with characters bathed in reds and blues. There is some action, but it is few and far between and overtaken by absurdity. When it’s all said and done, Gasoline Alley is just another below average action film – status quo from Willis and Drake.