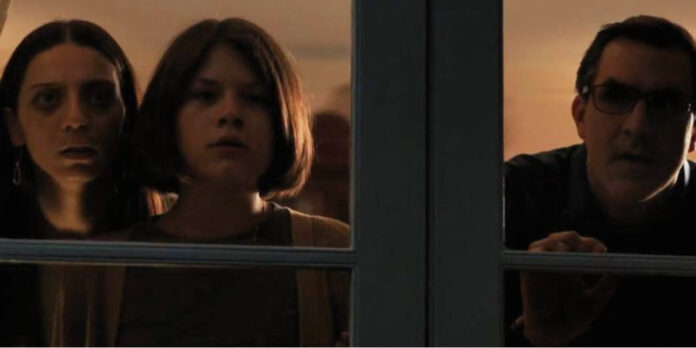 Vacations, nosey neighbors, dinner parties…the horror genre would die without these things. Put them all into a single movie and you’ve got Blumhouse’s latest, A House On the Bayou, from multi-talented filmmaker Alex McAulay.

Starring Westworld‘s Angela Sarafyan, The Assassination of Jesse James‘ Paul Schneider, and Lia McHugh, who is poised for a breakout in Eternals later this month, the film centers on a couple who go on vacation with their daughter to remote Louisiana mansion. Stupidly, they invite their overly friendly neighbors over for dinner, only to be shocked when things take a sinister turn.

McAulay made his directorial debut last year with the thriller Don’t Tell a Soul. He also wrote and produced the Zoey Deutch coming-of-age comedy Flower, and has recorded five albums and written a few novels. The guy does it all.

A House On the Bayou hits Epix and VOD on November 19th.

In an effort to reconnect and mend their relationship, Jessica and John Chambers (Angela Sarafyan, Paul Schneider) seek an idyllic getaway with their daughter Anna (Lia McHugh) to a remote mansion in rural Louisiana. When suspiciously friendly neighbors show up for dinner uninvited, the weekend takes a sinister turn as the fragile family bond is tested and dark secrets come to light.