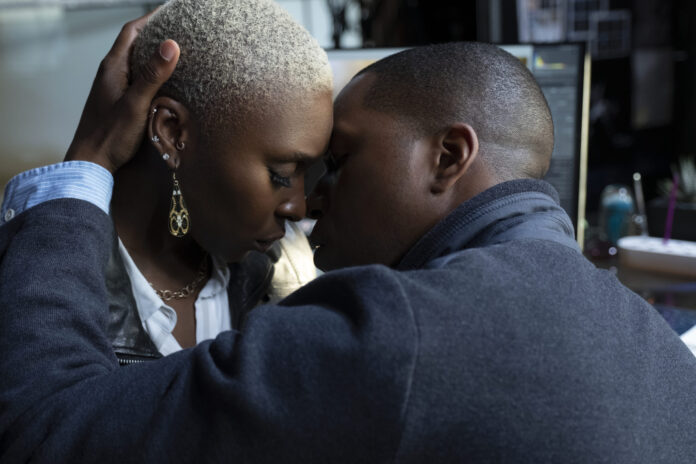 “If love is in the form of a circle, what lines would you cross to be with your soulmate?”

That’s the question at the heart of Ridley’s film, which he wrote and directed based on a short story by Robert Silverberg. The story, set in the near future, follows a married couple whose relationship is tested when a time traveler gets all up in the mix.

In the clip, we see Odom’s character Nick being told that he can travel to anytime that he wants. With memories of his wife Janine slipping away, he decides to go back to her, although that’s complicated by her ex-husband who bent time to try and split them up.

This is Ridley’s first feature behind the camera since 2013 biopic Jimi: All is By My Side. He recently helmed the LA Riots doc Let It Fall: Los Angeles 1982–1992, and wrote the Ben-Hur remake in 2016.

Needle in a Timestack hits theaters and digital on October 15th.

If love is in the form of a circle, what lines would you cross to be with your soulmate? In this gripping, near-future love story directed by Oscar® winner John Ridley, Nick and Janine (Oscar® nominees Leslie Odom, Jr. and Cynthia Erivo) live in marital bliss, until Janine’s ex-husband (Orlando Bloom) warps time to try to tear them apart using Nick’s college girlfriend (Frieda Pinto). As Nick’s memories and reality disappear, he must decide what he’s willing to sacrifice in order to hold onto — or let go of — everything he loves. Can love endure in a future where time is fluid, and all of life may be just an illusion?