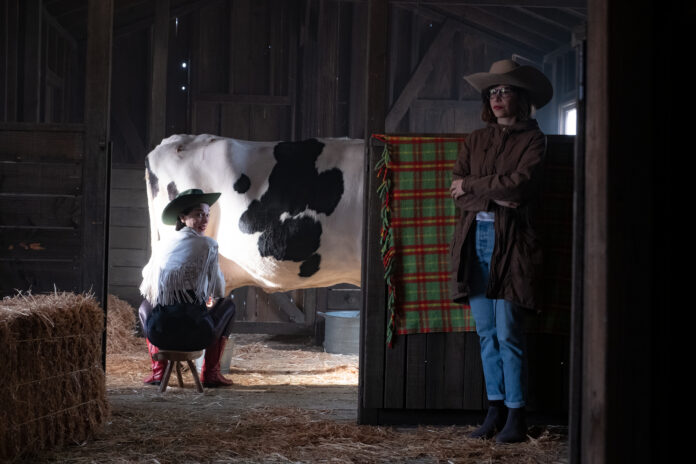 If I were to tell you that a mockumentary about fame and identity starring Portlandia’s Carrie Brownstein and St. Vincent herself Annie Clark starts out with a white limo speeding through the desert, you would say “Of course, it does.”

That kind of imagery and irony runs rampant in The Nowhere Inn, a comedic thriller written by Brownstein and Clark and directed by Bill Benz. Clark plays a version of her-rockstar-self who hires her “best friend” Brownstein to make a documentary of her Masseducation for  “people to know who I really am.”

However, this fictional Clark eats radishes and plays Scrabble after her shows. She’s not exactly the rockstar type which doesn’t make for rock-doc fodder. As Brownstein says the difference between her onstage persona as a guitar-shredding sexy rockstar and her real-life is “jarring.”

From 2011-2018, Carrie Brownstein parodied and satirized hipster culture in Portlandia. More silly than surreal, the drummer-turned-writer/actor/director thrived in sketches opposite Fred Armisen. The Nowhere Inn Brownstein is long past that success and we meet her when her new TV pilot gets rejected making her naturally and obsessively question if she still measures up to her own reputation. She slowly projects her own insecurities onto Clark.

“I can be St. Vincent all the time,” she promises when she finally cracks. What follows is a surreal hellscape that is as full of cringe as it is laughs as Clark tries to push the boundaries of what other people find interesting.

Though Clark has only acted in a few projects, she is electric onscreen. As she slowly becomes unhinged she still hits every comedic beat with ease. Her scenes with her family and a sex tape with Dakota Johnson epitomizes how far Clark is willing to go. Some of the film’s best moments are the straight concert scenes when it feels more like a concert documentary than a social commentary on fame and parasocial relationships.

Director Benz struggles connecting to Brownstein’s character in the same way he does Clark. As the audience surrogate, her own storylines set up at the beginning of the film never fully pan out. Brownstein’s face almost always looks like she’s about to say “What did I get myself into?” As a viewer, it’s hard not to feel the same way.

The latter half of the film is very dense and layered. “Lynchian” has been thrown about by other critics. While it certainly has a David Lynch feel, The Nowhere Inn is too overwhelming for you to want to stay long.

The Nowhere Inn is available on-demand. Watch the trailer below.