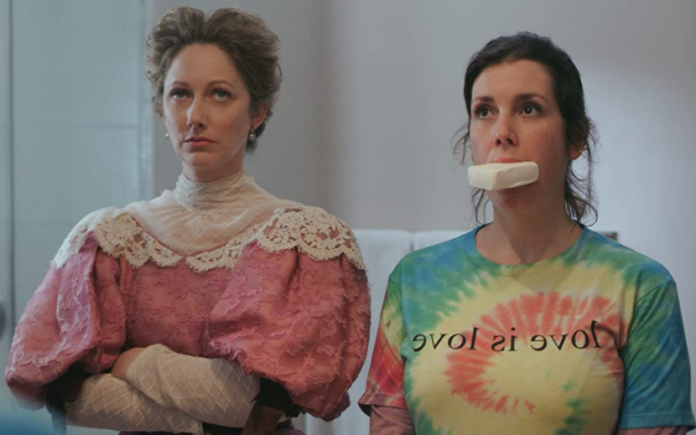 Lady of the Manor is a friendly supernatural and comedic version of when past and present collide. Lady Wadsworth (Judy Greer, Halloween Kills) is an uptight Southern belle who dies in 1875. Flash forward to present day where stoner-slacker Hannah (Melanie Lynskey, Heavenly Creatures) is hired to portray Lady Wadsworth while giving tours at the Manor. Opposites repel and attract in this double director/co-writer debut film featured by brothers Justin Long (Dodgeball: A True Underdog Story) and Christian Long (A Case of You).

Hannah (Lynskey) is a hot mess! She’s gotten herself into more trouble than it’s worth. Desperate times call for desperate measures and she is lucky enough to score a job she can squeak by on. Having no knowledge of the Civil War-era Savannah style Manor and the proper lady she’s supposed to portray, Hannah figures she can fake it. That is until the ghost of Lady Wadsworth (Greer) appears! Lady Wadsworth tells Hannah it’s time to change her wild ways or she’ll haunt and ridicule her until she does.

Hannah is crass, lazy, and smokes pot throughout most days. Lady Wadsworth, is from an entirely proper era.  An era in which she believes that ladies must behave very accordingly. She speaks well, she minds her manners, and the most she ever indulges is in the occasional second mint julep. Hannah has unlady-like habits that she keeps on full display. She pours her emotions out on a local bartender (Luis Guzman, Shameless) who is almost always taken back by Hannah’s personality.  Her emotions drive further off track when she stirs up an unlikely relationship with owner, relative, and spoiled pretty boy, Tanner Wadsworth (Ryan Phillippe, Cruel Intentions).

Judy Greer and Melanie Lynskey are a great comedic pair. This Lionsgate film ranges on a dynamic scale of prim and proper to wild woman out of control. Brothers Justin and Christian Long proudly describe Lady of the Manor as belonging to a brand new genre: a “fart-warming comedy”. Admittedly, the film is charming and has some chuckling moments but it does drag on too much. Some jokes and lines stood out but others tended to land with an awkward flop. Simple dialogue and storyline but otherwise a fun and nostalgic casting choice for Gen-Xr’s like me. A G-rated stoner flick that will put you in a good mood. Not a bad start for the Long brothers’ directorial debut. I say, it deserves a watch.

Lady of the Manor will release in select theaters, Apple TV, and anywhere you rent movies on September 17th.