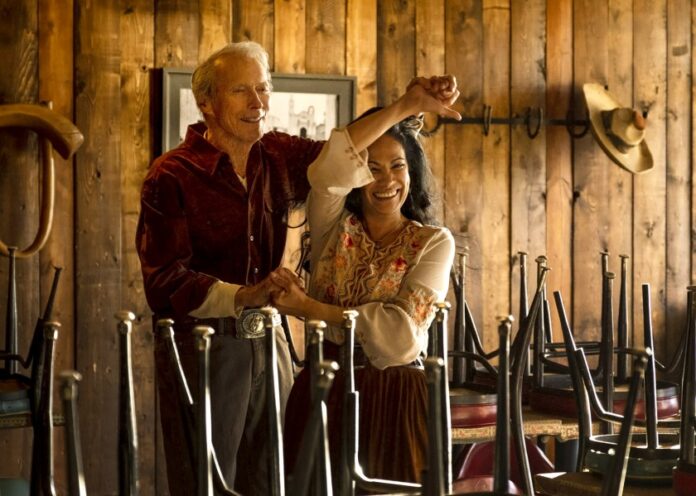 The irony of Clint Eastwood starring in an adaptation of N. Richard Nash’s Cry Macho, about an old cowboy who rejects his tough guy ways, is that he nearly did it 33 years ago. Eastwood would’ve been 58 at the time, but he rejected it to do what? Play the ultimate tough guy, Dirty Harry, one more time. Roy Schneider nearly took the role, so did Arnold Schwarzenegger. But patience has its virtues, and now in 2020 at the ripe old age (appropriate) of 91, Eastwood is back at it. The result is a modest, deliberate slog, but Eastwood manages to deliver his share of charms, informed by decades of the legendary actor being, well, macho.

Eastwood saddles up to the role of Mike Milo, a former rodeo champion who lost everything along the way. Riding bulls cost him his health, as a broken back ended his career. A car accident did away with his family, killing his wife and child. When he shuffles into work at the ranch, disregarding his boss Howard Polk (Dwight Yoakem), he looks like a man without much to care about in life. When Howard fires him just for being late, Mike only rustles up enough energy to insult the man before leaving.

Penned by Gran Turismo writer Nick Schenk (Nash is credited, too, posthumously), Cry Macho doesn’t take long getting started, a red herring considering how it ambles along throughout. A year later, Mike is hired by Howard to go into Mexico and retrieve his estranged teenaged son Rafo (Eduardo Minnett) from his shady, oversexed mother (Fernanda Urrejola) who may or may not be abusing him. When he gets there, Rafo isn’t just the nice kid seen in the years-old photograph. He’s a fledgling criminal who spends his time at cockfights with his pet rooster, Macho.

The journey back is prime material for emotional bonding, an impromptu father/bond connection allowing them both to find that thing they’ve been missing in life. The problem is that not much happens in Cry Macho. That’s not to say it’s completely uneventful. Rafo’s mom sends one of her thugs to harass the duo, allowing Eastwood to show that he’s still capable of throwing a mean punch. The threat of law enforcement, especially corrupt Mexican Federales, looms large. But the connection between Mike and Rafo is consistently underplayed, with Minnett struggling to match up to Eastwood’s still-powerful presence. To be charitable, the Rafo role could have done with a more experienced young actor to better convey some of the heavy themes Cry Macho tangles with. Eastwood, who has been dabbling in this meta territory for a while now, has settled easily into it here. Almost too easily. He’s never looked this frail. At times, usually when in some verbal spat with Rafo or when he’s getting saved by an aggressive rooster (yeah, that happens a couple of times), he looks like he could be blown over by a stiff wind. His physical appearance adds a gravity to his performance, informed of course, by our memory of him as the cowboy of cowboys. Those days are indeed long gone, and Cry Macho works best when it leans into that.

The best example is what turns out to be an overlong interlude in a small Mexican town, where Mike connects with a thirsty widow (Natalia Traven), who feeds his belly and his soul. Not only does he soften under her affections, but Mike begins to teach Rafo what it really means to be tough. He gets to pass along some of the knowledge he missed out on after his child’s death, while Rafo gets the careful parenting he never had. While this section moves just as ponderously as the rest of Cry Macho, it’s also the meatiest and most touching element.

Unfortunately, the peace can’t last forever even if it might feel like it. Eastwood has made a lot of big films for Warner Bros., including a pair of Best Picture winners in Unforgiven and Million Dollar Baby. He’s kept chugging right along, making movies his way and ignoring the faster, slicker, blockbuster style. Even though Cry Macho is not the greatest addition to his filmography, you have to respect Eastwood for staying true to himself, because it takes a real tough guy to do it nowadays.

Cry Macho is in theaters and HBO Max now.

Box Office: ‘Shang-Chi’ Stays At #1 For Third Week In A Row