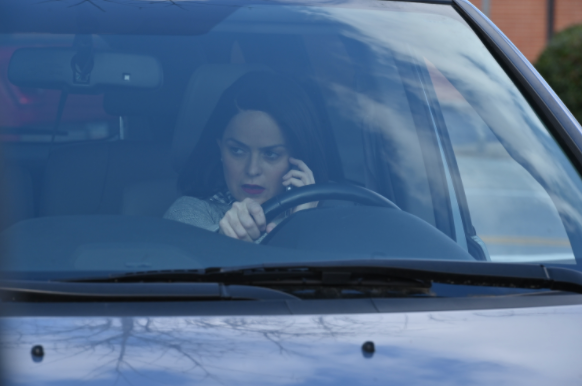 Karen is a modern day thriller about deep rooted racism that is written and directed by Coke Daniels (Highway). “Karen, is by far my most deeply personal work to date. My hopes are that it continues the dialogue for change, as it relates to the mistreatment of black, indigenous, and people of color around the globe.” Said Coke Daniels. Quiver Distributions is the perfect film production company to feature a subject of this magnitude. They respectively present taboo topics and scenarios that most mainstream, if not all, major film companies tend to steer away from. This particular film was inspired by the ‘Karen’ meme. The infamous meme became a global phenomenon as a calling card representing entitled and grossly racist, white women.

Karen Drexler (Taryn Manning, Orange is the New Black) fits the “Karen’ meme in every aspect, even sharing the same name. She is very good at being a selfish bitch and does it with a smile on her face.  Karen also shares her “charming” personality with the rest of the community by serving as the HOA’s president. A new couple have just moved in next door to Karen. Malik and Imani are sweet, successful, and happen to be Black. This crazy ass white woman decides to make it her personal mission to rid herself and community of her new neighbors. Community activist Malik (Cory Hardrict, American Sniper) and his wife Imani (Jasmine Burke, Saints & Sinners) are new to this Atlanta suburb and are looking to start a family. Despite Karen’s obscene tendencies and clear racism thrown their way, Malik and Imani won’t be backing down without a fight.

Karen sequentially calls attention to the real-life drama faced by people of color to this very day. Taryn Manning brilliantly embraces her Karen role. I love to hate her as she goes from one crazy scene to the next. Hardrict and Burke have good chemistry but the overall presence of the actors and dialogue lacked passion. Words and circumstances are straight to the point and clearly mirrors real-life situations experienced.  However, times of confrontation or expressing genuine pain and turmoil came across as low budget novelesque rather than true life affliction. Karen is a decent film that teeters on more of a documentarian point of view.

With that being said, I want to feel the good, the bad, and the ugly of how this subject matters and the role it plays in the real world. Don’t sugar coat or pussyfoot around the issue. I am pleased that Coke Daniels and Quiver Distribution is putting out more films and addressing issues like this but please, bring more heat! Passion is not anger but a truth that can deeply inspire the heart and be cleansing for the soul. Despite the film feeling more scripted and commercialized, I recommend watching it.

Karen will be available in theaters and VOD on September 3rd.