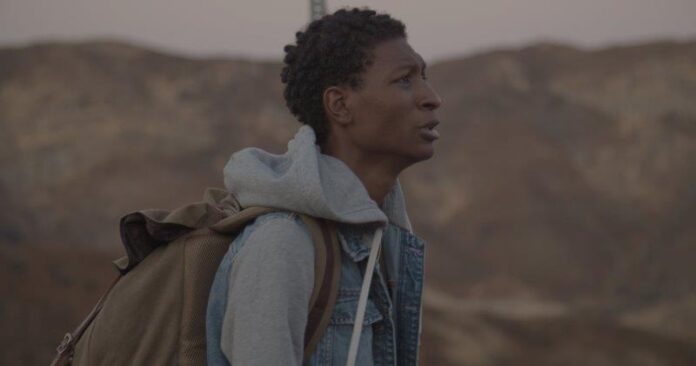 Director Delmar Washington’s directorial debut Outsiders is an ambitious swing that tries to continue the tradition of providing social commentary for science fiction. As with most socially relevant genre movies, there needs to be a delicate balance at saying something important about how our society currently is (either for good or bad) combined with the aesthetic of an entertaining genre film. Unfortunately, more than not, Outsiders doesn’t hit the nail on the head when trying to do both.

Originally titled “No Running” (which might have been a better title for the film), Outsiders follows Jaylen (Skylan Brooks), who has just moved with his mother (Rutina Wesley) and older sister Simone (Diamond White), and their baby sister in with his sister-in-law (Taryn Manning) to escape his abusive father and moved into a small southern town where they are pretty much the only black people there. While the family makes nice with most of the people there, almost everyone treats them like it’s a few decades ago and the racism is on full display. Even the documentaries in school highlight the “positives” of segregation. Needless to say, it’s not very welcoming for Jaylen.

For the most part, he keeps his head down. He goes to school and goes to work and keeps an eye on his mother, who is just itching to go back to her abusive husband. Everything changes when Jaylen and Simone decide to go to a local party. Jaylen mostly keeps to himself, but Simon’s friend (and one of the few other people of color) Amira (Clark Backo) has just broken up with her a-hole boyfriend and decides to spend the party hanging with Jaylen. The two naturally hit it off and as they break away from the party, they go hang down by the lake. It just happens that the lake is famous for an unexplained disappearance a few decades ago. Amira and Jaylen decide to go swimming and briefly do, but out of nowhere a large rainstorm happens and in the midst of what appears to be lightening, Amira is literally “beamed up” and disappears off the face of the earth.

Jaylen is naturally worried and at first, assumes that she just left as the cops shut down the party while they were swimming alone. Slowly but surely, it’s revealed that she’s now an official missing person. With Jaylen being the last person to see her (and the only black man in town), he’s now a suspect. After all, who’s going to believe that aliens abducted her. He gets on the radar of the town sheriff (Shane West) and decides not only is he going to stay out of sight, but he’s going to solve the mystery of Amira’s disappearance all on his own. After going through library microfiche, he realizes that this has happened before. The urban legend of a disappearance by the lake is really real. He searches Tim (Bill Engvall) who witnessed the same thing decades ago and has been relegated to being the “crazy guy” of the town as a result. Bill explains that this is an ongoing thing and the powers that be would rather cover it up as it also covers up a crime down long ago. So rather than face the real possibility of alien abduction, the Sherriff is willing to arrest an innocent black man and send him to jail.

Outsiders does a good job at displaying how it is to be the only black face in white spaces. As many black people living in America can attest to, it’s always a weird balancing act of being the “only” person of color in any given scenario/scene/location/etc. It’s always full of tension and director Delmar Washington does a great job at displaying how eerily weird such an everyday occurrence is. The film also displays how white supremacy is the lifeblood of such a place. While it feels a little too on the nose, this is often how many people of color experience everyday life.

However, for a sci-fi movie… Outsiders needs a lot more sci-fi. The entire premise is based on an otherworldly abduction, but it is almost non-existent throughout the film. This is most likely in part due to this being an indie movie and it shows that there was not a significant budget for the movie. Even the alien abduction is simply just a bunch of bright lights cleverly edited with a strobing effect. Outsiders should have dedicated more time in to the unraveling of the mystery, and thrown a few more coins into the production. We did not necessarily need to see aliens in action, but we needed to see a little bit more than bright lights and rain. The ending of the film is also predictable and yet leaves you wanting more as it comes to an abrupt ending that could have used an epilogue to say what happens next as there were still some loose ends. Overall, Outsiders is a worthy swing for a first-time big-screen director who wanted to address the issue of race, he just happened to wrap it in an uneven sci-fi film.