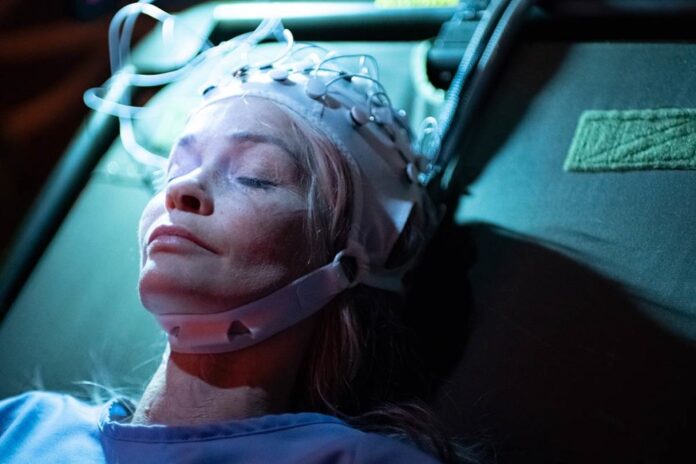 I hesitate to start this review by pointing out the great potential promised by Neill Blomkamp’s incredible debut film, District 9. We all know what happened from there and he has not lived up to that high bar. But there continues to be tremendous interest in what he does next, and with Demonic, his first since 2015’s misfire Chappie, Blomkamp goes somewhere he never has before: the realm of horror. But of course, this being Blomkamp, it’s also a story about technology gone dangerously wrong. Unfortunately, it is again a situation where Blomkamp teases something greater than he actually delivers.

Demonic stars Carly Pope as Carly, who continues to be tormented from the pain of her past. She’s still having nightmares about her estranged mother Angela (Nathalie Boltt), an arsonist and mass murderer. While Carly has no intention of ever seeing her mother again, she’s drawn back by Therapol, a shady research company that has developed a way to transport individuals into a virtual reality simulation inside the mind of comatose people, of which Carly’s mom is now one under strange circumstances. This shady group are determined to uncover the source of a deadly malady, but all Carly sees this as a chance to tie-up loose ends. When she enters the matrix, so to speak, nothing is as it seems. Something supernatural is lurking within this digital dreamscape where the lines of reality and fantasy are blurred.

Blomkamp continues to be a visual wiz, and bolsters this literal ghost-in-the-machine horror with a mix of pixelated and classic horror iconography to give the film a unique look. When Demonic is within this VR space he’s in top form, jumbling events in Carly’s tortured past with her and Angela’s fragmented memories, creating a kind of digitized nightmare from which there is no escape.

At his best when working with limited resources and not the overblown budgets of his last couple of features, Blomkamp is right at home crafting Demonic high-tech/paranormal mindscape, and that includes the raging bird-like force that terrorizes Carly and her friends, Sam and Martin (Kandyse McClure and Chris William Martin) who she has only recently reunited with. But I also got the sense that Blomkamp was hamstrung by the lack of funds, leading to more time being spent in the real world where the story is plodding and unimaginative, with Carly’s various relationships poorly defined, including with her mother.

There’s also the matter of a twist involving Therapol that reveals their true nature to be something absolutely absurd and like someone had seen the movie Priest one too many times. Blomkamp, perhaps realizing how bad it was or because there wasn’t the money to follow this ridiculous path further, quickly turns away from it although I suspect there is deleted footage out there somewhere. Regardless, what was kept in hangs over the rest of Demonic like an albatross because it just doesn’t fit at all, this unnecessary splash of warrior religion in what could’ve been a frightening look at the space between the technological and supernatural worlds.

Demonic opens in theaters on August 20th followed by VOD a week later.