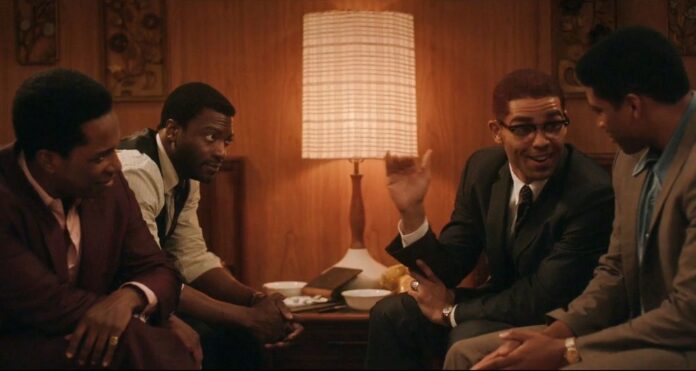 Regina King’s directorial debut One Night in Miami is gaining a lot of momentum at just the right time. This being the awards season, you’re seeing her film, about an encounter between Malcolm X, Cassius Clay, Sam Cooke, and Jim Brown in 1964, on a lot of “Top 10” lists. That includes my own, in which it ranks, well, pretty damn high. And all of this buzz could end up leading King to her share of Oscars in the coming months. But first, here’s a new trailer as it prepares to hit theaters this weekend, and then Amazon Prime on January 15th.

One Night in Miami is based on the play by Kemp Powers (also the writer of Pixar’s Soul), and centers on a single night in 1964. Eli Goree stars as Cassius Clay, who has just won the heavyweight championship from Sonny Liston, and so he goes to celebrate with a few of his famous pals:  Kingsley Ben-Adir as Malcolm X, Aldis Hodge as Jim Brown, and Leslie Odom Jr. as Sam Cooke. Over the course of an evening mostly spent in a hotel room, these four black icons discuss race, power, fame, and the call to social justice. What responsibility do they owe, as celebrities, to fight for a cause bigger than themselves?

Also released are four new posters that rightfully put this incredible cast in the spotlight. Not only might the film win awards for King and for Best Picture, but for the actors, as well.