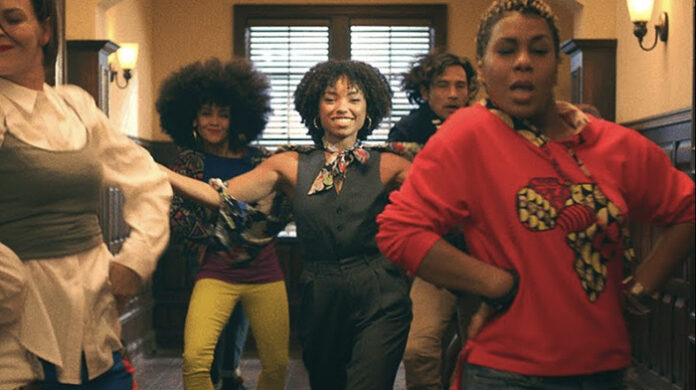 Of the many successful films to emerge from Sundance, Justin Simien’s Dear White People was probably the most unlikely to be turned into a hit series. But three years after its 2014 premiere, which I took a lot of heat for thinking was merely okay, the show arrived on Netflix and at least in my opinion surpassed the movie in every way imaginable. Simien was given the space to explore issues of race with humor and depth, and now after four seasons it is coming to a close.

However, this won’t be just a typical season, as Simien is taking us through senior year at Winchester as a year-long musical finale. Pretty cool, and definitely ambitious. Logan Browning, Brandon P. Bell, Antoinette Robertson, and DeRon Horton. John Patrick Amedori, Ashley Blain Featherson, and Marque Richardson return, along with new additions Karamo Brown (Queer Eye) and Rome Flynn (How to Get Away with Murder).

Here’s the season synopsis: Set against the backdrop of senior year at Winchester as well as a not-so-distant, post-pandemic future, Dear White People Vol. 4 finds our characters looking back at the most formative (and theatrical) year of their lives. Both an Afro-futuristic and 90s-inspired musical event, Dear White People Vol. 4 is a can’t-miss, farewell experience with one pitch-perfect promise: sometimes the only way to move forward is to throw it back.

We already know where Simien is headed next. After directing Bad Hair a couple of years ago, he’ll shoot on over to Star Wars for a Lando event series, as well as a remake of Disney’s Haunted Mansion.

‘Star Wars’: New Live-Action Shows Include ‘Lando’, ‘Ahsoka’, ‘Rangers Of The Republic’, And ‘The Acolyte’