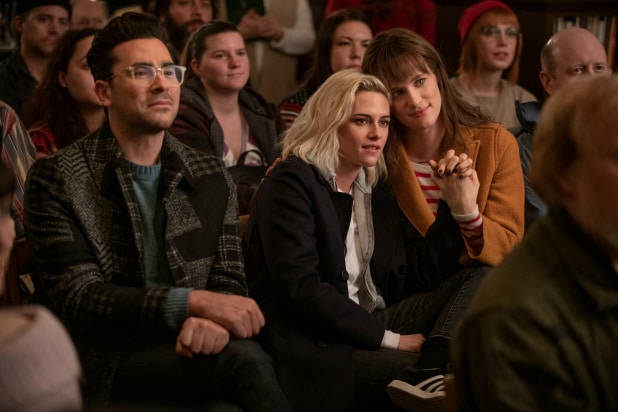 For many people, Christmas time means Christmas movies. Earlier this year Hallmark received backlash for announcing that they would finally be making a Christmas movie starring a gay couple. As Hollywood continues to reckon with its past lack of diversity, many more films featuring marginalized communities are taking center stage. Co-writer and director Clea DuVall never saw herself represented in Christmas movies growing up. After working as a well-known actor for over 20 years and directing her first feature, The Intervention, a couple of years ago, DuVall decided to make her childhood dream a reality. And thus we have Happiest Season, a Christmas romantic comedy starring a lesbian couple.

As that couple, Kristen Stewart and MacKenzie Davis play their characters of Abby and Harper as straight as possible (I don’t mean sexually). Dating for about a year, Harper decides to invite Abby home for the holidays to introduce her to her family. However, Harper has still not come out, forcing Abby back into the closet with her. Abby, in love and wanting to make the relationship work, decides to make that sacrifice and finds that getting along with Harper’s family, played by Victor Garber, Mary Steenburgen, Alison Brie, and Mary Holland,  is harder than she thought.

Three performances stand out the most in a sea of well-known actors. Dan Levy, known for creating and starring in Schitt’s Creek, plays a serial typical gay man perfectly. Funny bringing a sense of joy and sarcasm to the film, the cliché nature of the character can be overlooked because the protagonists are lesbians. Aubrey plaza as Harper’s ex-girlfriend plays a grounded character surprisingly well. She and Stewart have electric chemistry together making you want a movie about the two of them. Mary Holland, as  Harper’s middle sister Jane, is really the comedic star of the show. Slightly over the top and always with a zinger, Holland proves that she has a lot more to give comedically than her current résumé may suggest.

Filled with cliché after cliché, one of the film’s main problems is how it handles coming out. A scary and difficult moment for anyone, the script traumatizes in trivializes. You question whether or not Stewart and Davis’ character should be together, as Davis’ Harper is completely unlikeable and may be harboring internalized homophobia. Eventually, this is resolved and a larger message about family secrets and acceptance is revealed. However, the issues the film brings up are not fully dealt with in the way that they need to be.

The entire characterization of Harper’s family is completely unlikeable, which is a problem. As an audience member, you root for Abby’s character to eventually join this family, but and question why would she want to. They are rude and dismissive and void of Christmas cheer. Probably more of a directing and writing problem and an acting problem, it feels like the entire film work right.

Equality and representation don’t just come from Oscar gold and groundbreaking cinema. It comes from mediocrity. There are plenty of horrible Christmas movies about white straight people falling in love and they still get made year after year. So why not let the gays have one of their own too. In fact, I look forward to seeing another one that I don’t enjoy because that’s progress. Happiest Season isn’t great but that shouldn’t stop more mediocre LGBTQ centered Christmas films from being made.

You can watch Happiest Season on Hulu. Watch the trailer below.