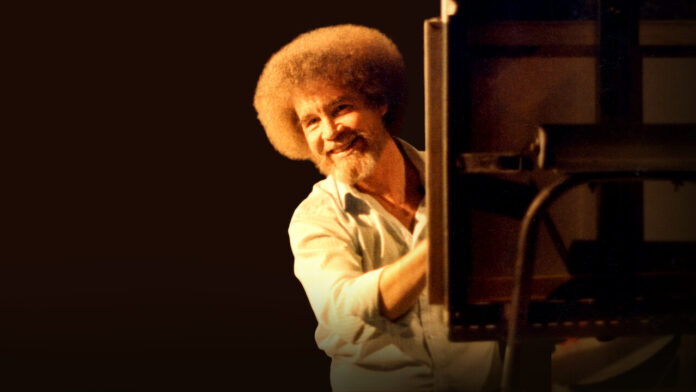 If you’re like me and grew up watching Bob Ross, he of the soothing voice and white man’s afro, paint happy little trees and clouds, then the title of the Netflix doc Bob Ross: Happy Accidents, Betrayal & Greed must make your stomach queasy. I don’t blame you. But fear not, because this isn’t a film that suddenly reveals something unforgivable about the man who taught so many the relaxing joy of painting.

This teaser is something else, because it invites you to get interested in what it is about to reveal about Bob Ross, but then says it can’t actually tell you a damn thing. I mean, that’s what a teaser is, I suppose, but rarely has the tease been so blunt. That said, the title should clue you in that it’s dealing more with issues of Ross’ estate and the extreme merchandising of his name that has taken place after his death in 1995.

Truth be told, I didn’t even know Ross had died back when I was watching him in the ’90s. His public access program was everywhere; it played on TV every weekend and you could eventually find it online. Now his show is even a popular Twitch channel.  While his gentle demeanor and seemingly amateurish art style made him the butt of jokes, I don’t know anybody who doesn’t become instantly chill when watching Ross do his thing.

Bob Ross: Happy Accidents, Betrayal & Greed brings us the shockingly untold story of the prolific landscape artist and host of The Joy of Painting. With a keen appreciation for nature and a kind and gentle demeanor, Bob Ross encouraged everyone he met to embrace their creativity and believe in themselves, becoming a cultural phenomenon along the way. The man who famously said that there were no mistakes – just happy accidents – has brought sheer delight to the world for decades. Beyond the iconic hair, soothing voice, and nostalgic paintings lies a mystery that many have yet to discover.