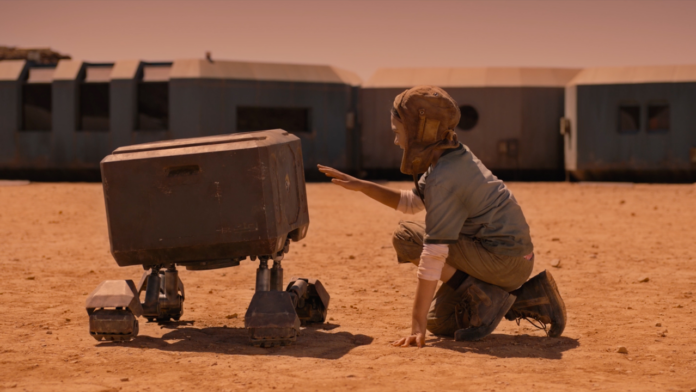 Imagine most of the blockbuster sci-fi movies you’ve seen that have been set on Mars. I’m betting none of them are anything like Settlers. Wyatt Rockefeller’s debut feature is a tense, claustrophobic chamber piece about a family living on an isolated farm on Mars, long after humanity has fled Earth. This makeshift life is interrupted by the arrival of a mysterious stranger looking to reclaim what he says is his. When violence erupts, it changes the life of 9-year-old Remmy who learns the hard way that life on this frontier is kill or be killed.

Rockefeller’s background doesn’t jump at you as someone who will eventually go on to make a feature film. An energy policy wonk who worked for the Obama administration, Rockefeller turned his attention to filmmaking and attracted a talented cast led by Brooklynn Prince, Sofia Boutella, Jonny Lee Miller, Ismael Cruz Cordova, and Nell Tiger Free. Shooting took place in an isolated South African desert, which gives the film a wide expanse, while Rockefeller’s energy background undoubtedly contributed to the industrial production design.

I had the chance to talk with Wyatt Rockefeller about Settlers, what the challenges were in making such an ambitious film on a limited budget, and as a first-time director no less. We also talked about the casting and the breakout performance by Cruz Cordova, whose terrifying presence is undeniable.

Settlers is in theaters now via IFC Midnight. Check out my review here and the interview below!