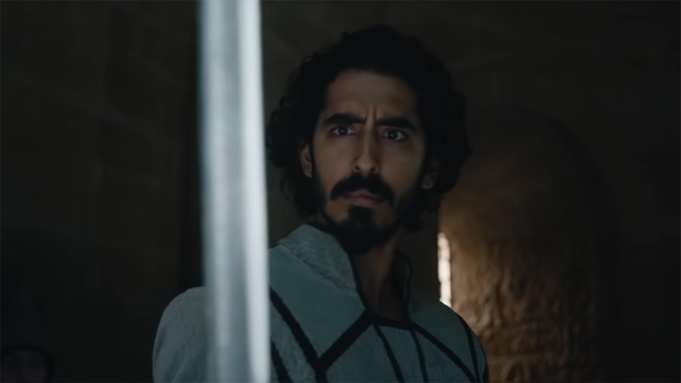 David Lowery’s The Green Knight may center on Sir Gawain, a member of King Arthur’s Knights of the Round Table, but this is not your typical swords ‘n shields movie. But then, why would we ever expect such a thing from Lowery, who reinvented the Western with his debut Ain’t Them Bodies Saints, reimagined haunted house tales with A Ghost Story, and made Pete’s Dragon a treasure for people of all ages. Lowery’s films have always had a surreal, fantastical quality, but in concert with this epic tale of male ego, chivalry, romance, and temptation, they make cinematic poetry and one of the most visually resplendent films of the year.

From the moment the smoky haze clears, The Green Knight transports you into a world that feels very familiar, and yet also very different. Lowery’s vision of the Arthurian age is rich with symbolism, heavy with themes of pride and personal honor. The initial shots feature Gawain, his head heavy with the crown of leadership, before bursting into flame. Dev Patel plays the young knight, who at this point has few aspirations to greatness. He’d rather lay in bed with his lover, Essel (Alicia Vikander), but is prodded into action by his mother (Sarita Choudhury), who also happens to be sister to King Arthur (Sean Harris) who is holding Christmas festivities. When Arthur asks the boy to join him by his side and share a personal adventure, Gawain says that he has none. Not yet, Queen Guinevere (Kate Dickie) remarks. Little do they both know.

Almost as if summoned, a gigantic green knight (Ralph Ineson), stony, ancient and imposing, rides into the castle. He carries an axe the size of most men, and issues a challenge. Strike a blow on him with the axe, but in a year’s time he will return the favor in kind. In a room full of legends, Gawain is eager to make his mark. He accepts the bloody and ill-fated challenge, only to find that lopping off the giant’s head is not the end of this game. Instead, the Green Knight merely laughs, picks up his dome, and booms “One year!”

The 14th-century tale reads a bit indecipherable, making for an adaptation that couldn’t have been easy. Gawain boldly goes off in search of the Green Knight, who is staying at the faraway Green Chapel, and has many different encounters that are alluded to but never detailed. Lowery fleshes out and enriches the story with interactions that underline the story’s chief ideas. Gawain has his code of honor tested (and abused) by a shady scoundrel (Barry Keoghan) on a battlefield full of corpses. He also meets a mysterious spirit (Falcon and the Winter Soldier‘s Erin Kellyman) who sets him on a grotesque mission, while a seductress wears him down as her husband (Joel Edgerton) is away on a hunting trip.  There’s also a friendly fox who tags along, but may or may not be the devious sorceress Morgan Le Fey, a prominent character in the original text. There are other temptations, all designed for Gawain to cower from his grim destiny. The chaos Gawain experiences is in direct confrontation to the practiced order within the stony walls of Camelot. For the path to becoming a hero is rarely a peaceful and predictable one, it is paved with death and uncertainty at every turn.  Mother Nature herself often seems to be working against Gawain, with cinematographer Andrew Droz Palermo’s camera painting a lush environment that is at times beautiful and terrifying.

If the 130-minute runtime does seem to stretch a little bit long, it’s not because of Patel who gives another career-best performance, something we seem to be saying about him a lot. Patel is credible throughout Gawain’s evolution, giving off some serious slacker vibes before his journey, only to be shaped by adversity that reveals his true character. Some may quibble with Lowery’s changes, reframing Gawain from a knight whose honor is tested to someone whose code is still a work in progress, but The Green Knight is better for it. As Gawain struggles to overcome his fear and face the death that awaits him, he becomes less a figure of legend, but a flesh and blood hero worthy of having his story told.

The Green Knight opens in theaters on July 30th.