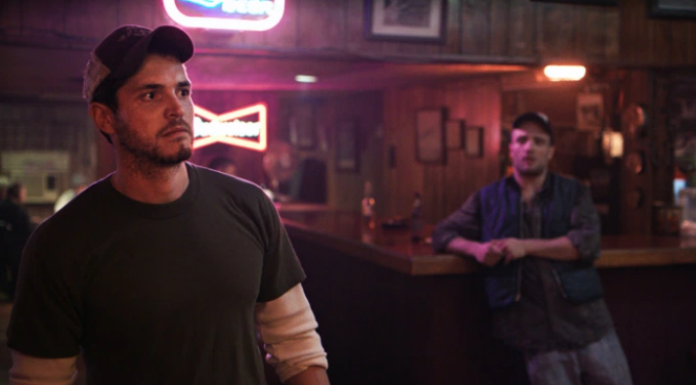 The Evening Hour is an authentic portrait of an Appalachian landscape that depicts the complex entanglement of hardship, hope, and drug addiction in rural America. Braden King (Here) directs screenwriter Elizabeth Palmore’s adaptation of the 2012 acclaimed novel by Carter Sickel. The autumnal mountains of southern Appalachia hold a haunting power of history and survival that grips onto a small town in constant decline.

Cole Freeman (Philip Ettinger, First Reformed) is a quiet, gentle, and caring man. He works for a home that looks after the elderly. Cole is often called upon to calm the spirits of restless residents. He plays an even bigger asset to his community by looking after elder residents who can’t afford or acquire proper care. To make extra cash, he buys and sells their unused prescription medications. Neighbors can buy food, supplies, and pay bills while others have a means toward their pain and/or addiction. As a rule, Cole never steals from his job and does his best not tangle with the area’s head drug dealer, Everett (Marc Menchaca, Ozark, The Outsider).

Cole (Ettinger) is the grandson of a staunch preacher (of sorts) who’s life is coming to an end. In the meantime, he cares for his grandmother Dorothy Freeman(Tess Harper) by cleaning up around the home and providing extra cash for essentials. When he’s not working and caring for the community, Cole spends his time hooking up with childhood friend, Charlotte (Stacy Martin, Nymphomaniac and Casanova, Last Love). Seemingly content, it’s just another day in the life for Cole.

In The Evening Hour, an old friend, Terry Rose (Cosmo Jarvis, Lady MacBeth) comes back into town. Terry, fired from his last job, returns as a retail manager and also oversees the employ of his ex-girlfriend, Charlotte.  Despite their previous friendship, Terry has dangerous new plans that threaten the fragile balance Cole has sustained for years. Amidst the addiction, economic stress, and environmental devastation that have his declining mining town in a stranglehold; his world and identity are thrown into deep disarray.

Life is pushed further out of balance by the death of his grandfather, Clyde Freeman (Frank Hoyt Taylor) and sudden homecoming of Cole’s estranged mother, Ruby (Lili Taylor, The Conjuring). Conflict increases with the region’s alpha drug dealer, Everett (Manchaca), Terry (Jarvis), and with local law enforcement closing in. To throw in the mix, Cole finds himself shifting feelings for Charlotte (Martin) to local bartender, Lacy (Kerry Bishé, Argo). Faced with intensifying pressure from all sides, Cole decides that he has to suck it up and take action. He wants to save the tight-knit fabric of family, friendship, and land that binds everything and everyone he loves. Before it all completely falls apart.

There’s no doubt that the Appalachian landscape is rich in color, especially in the fall. Scenic images and calming sounds of nature surround dilapidated homes, small town businesses, and outdated vehicles fitting of rural America. Although mesmerizing in it’s own way, these lovely images couldn’t save The Evening Hour from a slow and hole filled narrative, empty dialogue, and emotionally confusing characters.

Cole has flashback memories of his grandfather preaching to a small group of people. At first, it seems innocent until each memory unveils a unique practice to their worship. That backstory would have been nice to know considering, and I suspect, is the reason of his mother’s absence. Having a small dialogue isn’t terrible, as long as actors can convey readable emotions to help tell the story. The Evening Hour severely lacks both. Moments between Cole and Charlotte are so empty that it’s difficult to know, let alone believe, when they’re upset or genuinely care for each other.

There are confusing moments where characters display odd emotions under certain circumstances. A scene shows Cole and Terry reminiscing of their past friendship while Terry begs for Cole’s help. The interaction is sloppy, hard to watch, and had me wondering if there is something deeper going on between the two. I don’t think there is, and who cares if there was, but it shows to how chaotic the film is. I respect the statement and reasoning of bringing to light a true epidemic that’s sweeping across the country. I’m sure Carter Sickle’s book is a testament of that. Having grown up in an area like this, I understand a lot more than even I care to admit. However, this film poorly executes the essence of almost all major categories that make it watchable. As someone who can relate, The Evening Hour is an unfortunate letdown that I do not recommend.