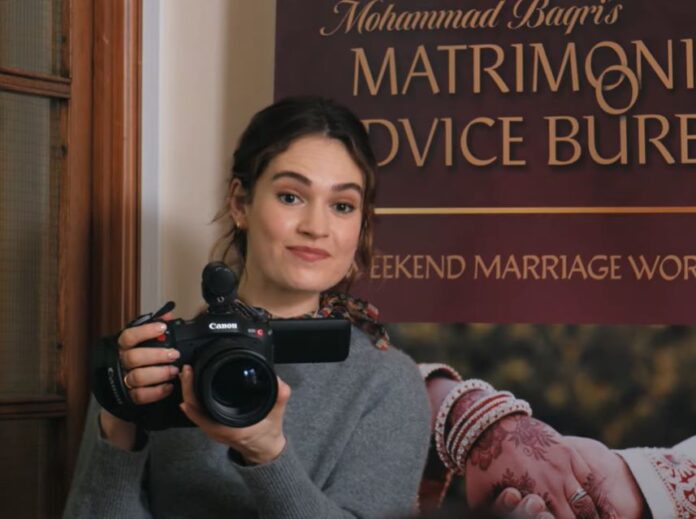 If there’s one thing that there’s plenty of in today’s world, it’s people that know they are right. Doesn’t matter the subject, they are right. For instance, are arranged marriages a good thing? Certainly most Americans would say “No! that’s insane”…as a matter of fact there are no less than 3 reality shows making a spectacle of this very thing. 90 Day Fiance? Arranged marriages.

This is exactly the topic of Studio Canal’s upcoming “cross-cultural rom-com” (their words, not mine) What’s Love Got To Do With It? starring Lily James and Shazad Latif. James and Latif star as two childhood friends (Zoe and Kaz) that are now a filmmaker and a doctor, respectively. Zoe decides that her next film will be a documentary following the arranged marriage that Kaz’s parents are currently setting up for him. While the setup is unique, the formula is not…odds are these two are going to figure out they love each other and everyone will learn a valuable lesson, but that’s not what matters. I’ve said time and again that formulaic does not equal bad, formulas exist for a reason, they work! It’s the cast that makes the difference and if the charisma and chemistry of Latif and James are any indication then I think Studio Canal has another solid romance on their hands.

Check out the trailer below and look for What’s Love Got To Do With It? in theaters January 27th, 2023.

How do you find lasting love in today’s world? For documentary-maker and dating app addict Zoe (Lily James), swiping right has only delivered an endless stream of Mr Wrongs, to her eccentric mother Cath’s (Emma Thompson) dismay. For Zoe’s childhood friend and neighbour Kaz (Shazad Latif), the answer is to follow his parents’ example and opt for an arranged (or “assisted”) marriage to a bright and beautiful bride from Pakistan. As Zoe films his hopeful journey from London to Lahore to marry a stranger, chosen by his parents, she begins to wonder if she might have something to learn from a profoundly different approach to finding love.