The name Nicolas Cage has become synonymous with weird but lovable film content. Whether he’s battling an army of supernatural animatronics of driving a hot rod to fight the devil, Cage almost never signs on for a boring film. Pig felt like it could go the more boring route, but that’s where the left turn comes, Cage reminds you almost immediately that he’s an Oscar winning actor and knows how to deliver a performance. In many ways, I think Cage’s success is a by-product of his fearlessness. What other major actor would sign onto a film whose elevator pitch was “Hermit tears through the Portland cuisine underworld in search for his only friend, a truffle pig” 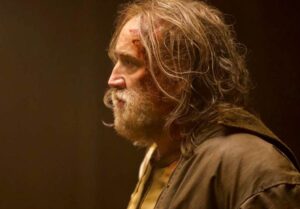 Rob Feld has some skeletons in his closet, but you’re not going to learn about those. That past has lead him to his current life, hold up in the forest living a solitary life with nothing but his faithful friend, a truffle hunting pig, for company. Feld’s only touch with society comes in the form of Amir, his contact to the Portland foodie scene, who comes up every now and then to procure the truffles Cage and his pig have collected. That is until Cage’s home is assaulted, he’s beaten, and his pig is taken. Leaving his home and the forest he occupies for the first time in a long time Rob Feld heads to the underbelly of Portland’s high-class restaurant landscape to get back what’s his and find those responsible. 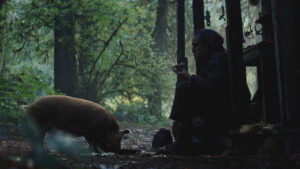 It would be irresponsible to not point out the John Wick with a pig parallels, but for the most part that origin story is where it ends. What we get instead is a tour through Portland’s top restaurant areas and the batshit crazy events, people, and situations surrounding them. Five-Star Michelin waiter fight club? Got it. A Gus Fring-esque cold as ice restaurant supplier? Adam Arkin’s got you covered here. Even that isn’t the focus here, I would have thought that the lack of copious hyper-violence would be a let-down. That’s what I was expecting after all. No, I’m not let down and that’s because I got a star reminder at how good of an actor Cage is. The film fully conveys the love, loss, and loneliness Rob Feld has for this pig that’s been his only friend for God knows how long. John Wick used the dog as motivation, but really it was a proxy for Wick’s lost wife. Feld has a lost love (that’s never fully explored) but the loss he feels is for the animal itself, and damn it….he knows how to make it feel real. A more subdued performance then we’ve come to expect from Cage in recent years we are made to feel Feld’s pain and desperation increase as the film progresses. For fans of the Cage stereotype, don’t worry, they throw in enough manic outbursts to keep you in your seat.

The genius of the story is how Feld’s journey serves dual purposes, first to find the pig, second to show the viewer why Feld ended up secluding himself in the woods. Stories that follow the “guy pulled back into his old way of life” narrative always show glimpses, but Pig manages to make you feel what would push him away from this in the first place. It would be hard for anyone that has experienced any level of loneliness or loss to not, at minimum, empathize with Rob Feld’s odyssey.

Obviously, not a movie for everyone. If you’re expecting a balls-out action/revenge flick then you may find yourself disappointed. That being said, if you go in with the right expectations you’ll find yourself reveling in Cage’s ability to project emotion and delving deep into a character study that is at the same time completely unrelatable and totally familiar to anyone who’s experienced loss.

Official Synopsis:
A truffle hunter who lives alone in the Oregonian wilderness must return to his past in Portland in search of his beloved foraging pig after she is kidnapped.

Written and Directed by Michael Sarnoski