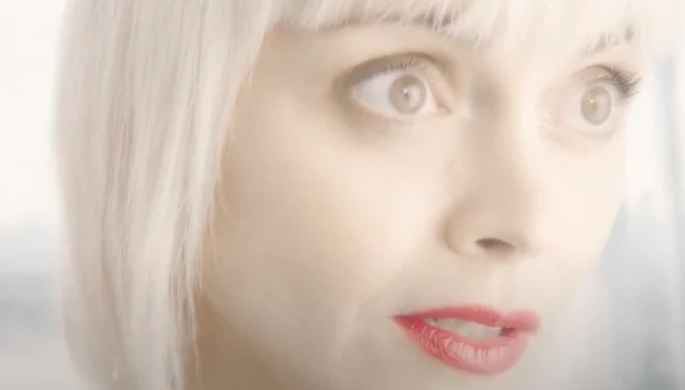 In Here After, Michael is a struggling actor in the midst of preparing his up-and-coming one-man-show and hopes it will lead to success.  He never makes it to stage as a bad breakup leaves him stranded at an airport followed by him driving home. He pulls over to the side of the road when he realizes he doesn’t have change to pay for the toll. Upon finding a quarter, his vehicle is struck by a large truck, killing him instantly.

Michael recounts the vivid memory of his first sexual encounter at the age of 15 he had with an older redheaded girl he was wildly attracted to. His story goes from fun to crazy as he being treated and eventually succumbs to his injuries. Michael awakens in what appears to be a “Singles Purgatory” to questions from a woman with pale hair, eyes, and skin. Introduced as Scarlet, she helps him remember how he died. She further reminds that he is indeed dead. Scarlet informs Michael that he must find his soulmate in order to officially cross over because it only works in pairs.

With limited time to find true love among other recently deceased singles, Michael must navigate the new customs of a ghostly dating life. Dating in New York when he was alive was hard enough. Even Michael admits to never really being that good at it. He struggles with adapting to death and strikes out with nearly every dead woman who’s seen and heard it all. Michael still has possession of the quarter he held in his hand at the time of his death. The coin plays a significant value in his journey to find his soulmate.

Michael almost gives up when he happens to meet HoneyBee by chance. A woman who, after a few minutes of talking to her, thinks she may be the one. However, there’s one thing that is keeping them apart. HoneyBee happens to be alive and is in danger from ex-boss and creepy stalker, Patrick (Alex Hurt). Michael must figure out if she feels the same for him and how to be together before time is over for them both.

Here After is a Vertical Entertainment film written and directed by Harry Greenberger and produced by Greenberger and Carmine Famiglietti. Christina Ricci stars as Scarlet, a red-lipped, red-dressed woman in charge of the afterlife perspective. Andy Karl stars as newly single and dead, Michael, who falls for the uniquely named and ever so lovely, HoneyBee (Nora Arnezeder). HoneyBee tries to introduce Michael to her living friend Faith (Nikki M. James) and Micheal seeks guidance from dead friend Angelo (Michael Rispoli). Angelo shows him the ropes but is content with staying single.

Crossing over with a required soulmate is an open-minded concept. A possible ideology of the afterlife that has piqued my curiosity. There’s a resonating Ghost (1990) vibe that intertwines a dark humor quality used to feather the weight of this particular topic. Admittedly, the dark humor is the highlight of the film. A half naked guy (wearing only a shirt) is reading a book in a bar to “bad jokes” riddled throughout the film are outright hilarious.

The cinematography for Here After has an interesting array of variations. The background illumination, subtle distinctions of the living vs. dead, symmetrical imagery, and color scheme are stunning.  The movement of empty escalators, brightly lit trees decorating the streets, to dead persons lifting to the sky as if they are riding in an invisible elevator. Characters are centered around backgrounds and colors that perfectly set the mood. Simple sounds of earthly white noise to calming elevator music while shifting through floors. The perfect metaphor of being caught between the two worlds of existence until a destination is reached. Lovely details that are this film’s redeeming grace however, not enough to save it from overwhelming flaws and rising conundrums.

The acting portrayed by Andy Karl (Michael) with his co-stars have their ups and downs. Ricci, much like her character, is a total boss. I loved watching the chemistry grow between HoneyBee and Michael and the glimpse into the friendship he and Angelo shared. However, when we meet Michael’s family, their mourning of him lacks any real grief or sadness. His mother Goldie (Jeannie Berlin, The Boys) refuses to accept the her son’s death but mother, father (Ray Inannicelli), and sister (Elissa Middleton) display no visible pain. Given the time sensitive agenda, even for the after life, certain scenes would drag on and on. Key aspects came across quite contradictory. Here After lacked logical insight and raised more questions regarding its intended purpose .

If not having a soulmate is considered “unfinished business” AND is necessary in order to cross over, why add another time clock of death to people already dead? What’s the rush? Michael observes random people disappearing, presumably at not finding their match in time. Although individuals who think they may have, disappear into nonexistence anyway. Do they not deserve the chance to find out or look a little longer? What if your soulmate hasn’t passed or even been born to die yet? What if the person you married in life turns out not to be your soulmate in death? Does the second death clock account for all that?

To note another observation, Scarlet makes it clear that Heaven and Hell do not exist as far as her world is concerned. If that’s the case, why show the dead rising in the sky? Distinctive artistry but with no explanation or real purpose, is simply, out of place.

Filming Here After in New York City must have been a challenge. There are numerous scenes where background locals and tourists are seen staring at the actors and filmmakers. Even the eyes of background actors follow Michael about when he’s supposed to be invisible among the living. Arnezeder and Karl are walking through Times Square and a young man is seen video recording with his phone during the live shooting. Not a fault by any means, but comical and distracting nonetheless.

Despite their connection, the onscreen kiss between Michael and HoneyBee is awkward. There’s something about the ending that doesn’t sit well with me either. What’s supposed to be the quest of the ultimate bond of love for eternal life feels selfish and forced. Which compels me to ask more questions: Is true love only considered such when it’s a sexual charge between two people? Does the love bond between individuals, such as a parent/guardian and child or soldiers who’ve served and died together on a battlefield not equate the same? Do bad people still get a soulmate? How is love qualified and justified when the term in itself is so damn broad?

I was hoping for an inspirational perspective to the afterlife and compare it to a personal favorite, What Dreams May Come (1998) that stars Robin Williams and Annabella Sciorra. Here After is visually captivating, funny moments, and includes the new song, “Mysteries of Life” by Debbie Harry, that conveys a dysfunctional narrative. At times presenting odd, if not convoluted, and contradicting depictions of ghostly life. I’m certainly not sold on the idea of a required soulmate in order to officially move on AFTER death. Especially, when that too also comes with an unknown time restraint. If Rom-Coms are your thing, go for it otherwise, it’s a straight-up no-go from me.

Here After will release On Demand everywhere, July 23rd.