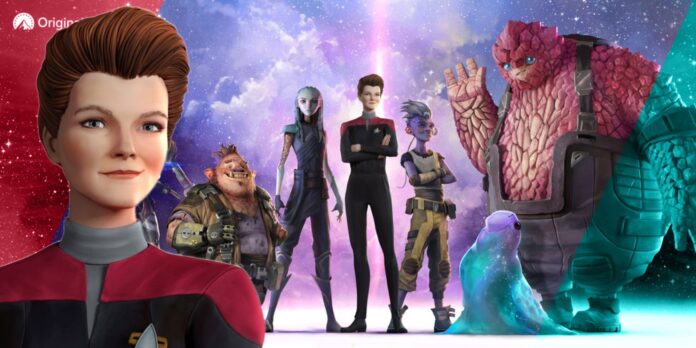 Developed by Emmy Award winners Kevin and Dan Hageman (Trollhunters and Ninjago) the CG-animated series Star Trek: Prodigy is the first “Star Trek” series aimed at younger audiences but is geared toward the all-around family. The show will follow a motley crew of young aliens who must figure out how to work together while navigating a greater galaxy, in search for a better future. These six young outcasts know nothing about the ship they have commandeered – a first in the history of the Star Trek franchise – but over the course of their adventures together, they will each be introduced to Starfleet and the ideals it represents. Growing up a proud Trekki I happy to admit that this is something to look forward to. The cast is perfectly matched and uniquely talented! I am super stoked that The Trek verse is expanding for younger generations to see and broaden those horizons.

Next up at Comic-con @Home 2021 and on the Paramount+: Peak Animation panel is Star Trek: Lower Decks.

Developed by Emmy Award winner Mike McMahan (Rick and Morty, Solar Opposites), season two of Star Trek: Lower Decks is going to be bigger, funnier and Star Trekkier than ever before! Expect strange new (and familiar) aliens to challenge the crews of the U.S.S. Cerritos and the U.S.S. Titan. For Mariner, Tendi, Rutherford and Boimler, the animated adventure is just beginning. The first season is currently available on Prime.