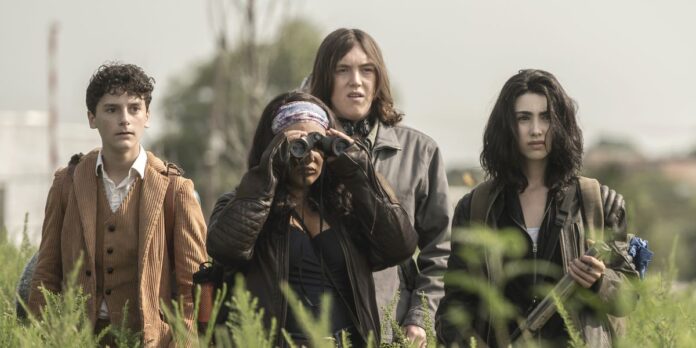 The Walking Dead universe continues to expand.  First, there was a spin-off with Fear The Walking Dead (about to start its 7th season this October), and then another spin-off series premiered last year The Walking Dead: World Beyond, which showcased a group of younger people that pretty much all they know if the zombie apocalypse.  Even though Iris (Aliyah Royale) and Hope (Alexa Mansour) lived pretty much-sheltered lives in the Omaha campus colony of the “Civic Republic” (the well-organized people who zipped Rick Grimes away in Season 8 of the OG show), destiny calls when they have to leave their sheltered life and search for their father who was held captive by the military wing of the authoritarian government: The Civic Republic Military (or CRM).  The first season of Walking Dead: World Beyond was “interesting” as it gave us a new outlook on the ever-expansive world of the zombie apocalypse.  The first season of the two-season limited series ended with Alex being taken away by the CRM and Hope vowing to fight and get her sister back to safety.  In anticipation of the upcoming second season, the cast and crew of the YA zombie show sat with Chris Hardwick for the Walking Dead: World Beyond panel at this year’s Comic-Con @Home.

After catching us up on the past season and showing a first-look clip in the aftermath of a CRM helicopter gone down and the survivors being eaten, we then see Felix’s (Nico Tortorella) boyfriend Will Campbell (Jelani Alladin) running from the CRM.  As he connects with Felix and Hope, we realize just how important he is to the CRM and why they are so gun-ho to take him out. Because Will has been on the run from the CRM, he has joined up with new survivors.  Not only is actor Jelani Alladin bumped up to series regular, but so have fellow actors Natalie Gold, Joe Holt, and Ted Sutherland for the second season of Walking Dead: World Beyond.

Executive producer Scott Gimple stated that because the limiter series is so focused on the evil Civic Republic, this season of Walking Dead: World Beyond will fill in some gaps from the other shows as they relate to the sinister government.  Gimple is quick to state that because all of The Walking Dead shows operate on different timelines, we probably won’t be having a crossover (and Gimple reiterated a few times that Rick Grimes won’t be on the show).

Cast members offered glimpses as to what will happen at the conclusion of the show, which will premiere on AMC on October 3rd at 10;00 PM.  Please take a look at the Walking Dead: World Beyond panel.