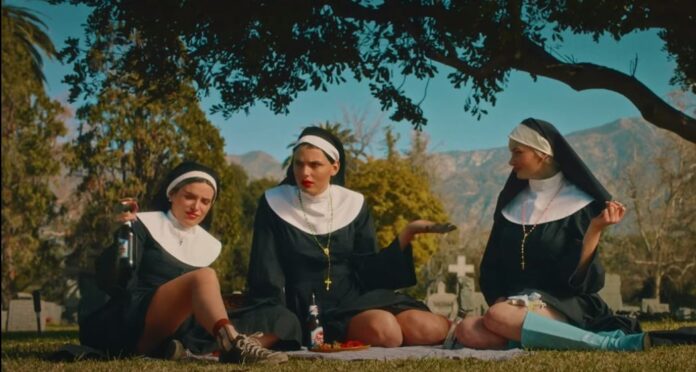 It took, literally, 3/4 of this trailer to figure out what exactly was going on here. I think I got it. Bella Thorne, Paris Jackson, and Josie Ho play LA party girls/drug dealers who get in deep with a local drug lord. The trio then takes on the mantle of a group of nuns that have come to LA to start a convent. Sounds crazy, looks crazier.

I have to admit, that while I’ve never been a fan of Bella Thorne she has been doing some interesting work as of late. Conversely, I have always been a fan of Gavin Rossdale (of Bush and being married at one point to Gwen Stefani fame) but haven’t seen him act since Constantine which was like, 20 years ago? On the plus side, dude looks like he’s on that Paul Rudd diet where you don’t age at all.

With regard to the movie itself, this looks like what’s becoming the standard mid-level VOD action flick, and I mean that in the best way possible. A taste of Go a sprinkling of Spring Breakers with a side of Crank to make it all go down. I have little doubt this will be one of those forgettable flicks that you are glad you watched.

Official Synopsis:
In this edgy thriller starring Bella Thorne, Paris Jackson, Hana Mae Lee, and Gavin Rossdale, a party girl and her sexy friends dress up as nuns to hide out from an angry LA drug lord.