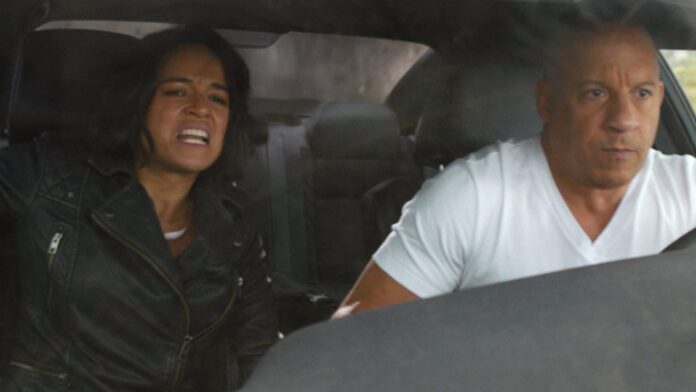 It’s been a very long wait, but F9: The Fast Saga is rapidly approaching. Not that it’s needed, but a new clip hypes up the arrival with a stunt that, shocker, defies the laws of gravity and physics.

The scene finds Dom (Vin Diesel) and Letty (Michelle Rodriguez) in a high-speed chase from pursuing helicopters. So what are they to do? Why, accelerate and swing across two completely separate land masses, that’s what.

You don’t need me to tell you this is complete bullshit, but that’s what we go to these movies for, isn’t it?

SYNOPSIS: Vin Diesel’s Dom Toretto leads a quiet life off the grid with Letty and his son, little Brian, but they know that danger always lurks just over their peaceful horizon. This time, that threat will force Dom to confront the sins of his past if he’s going to save those he loves most. His crew joins together to stop a world-shattering plot led by the most skilled assassin and high-performance driver they’ve ever encountered: a man who also happens to be Dom’s forsaken brother, Jakob (John Cena, next year’s The Suicide Squad).

“Well, that was new.” Watch an exclusive clip from #F9 – swinging into theaters June 25th. pic.twitter.com/uoejVBiH1F