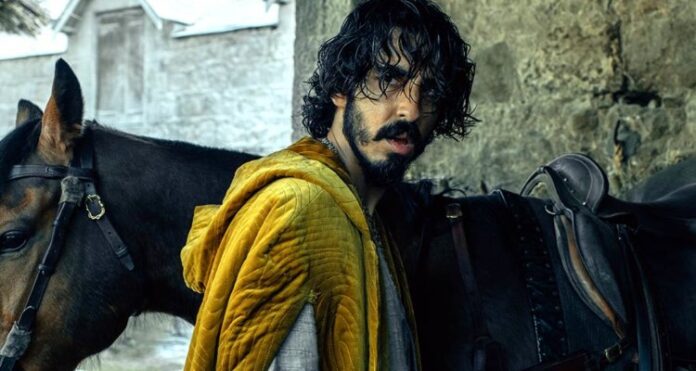 The wait has been a long one for David Lowery’s The Green Knight. Like everything else, it got delayed a considerable amount by the pandemic, pushing off a film that has many eager to see Dev Patel back in a leading role, this time an epic fantasy based on the Arthurian tale of Sir Gawain and his quest to confront the titular giant who he has made an ill-fated bargain with.

Joining Patel in the film are Alicia Vikander, Joel Edgerton, Sarita Choudhury, Sean Harris, Kate Dickie, Barry Keoghan, and Ralph Ineson. A24 was going to give the film a world premiere at SXSW, only to have it canceled when the festival shut down.

I know a few people who have already seen it as they were going to do interviews, and they’ve all got good things to say, in particular about Patel’s performance.

The Green Knight will finally open in theaters on July 30th. This one might be a sleeper for the summer, as it has the gigantic scale of a blockbuster, but also the indie chops of a filmmaker like Lowery, who is best known for Ain’t Them Bodies Saints, Pete’s Dragon, and A Ghost Story.

An epic fantasy adventure based on the timeless Arthurian legend, The Green Knight tells the story of Sir Gawain (Dev Patel), King Arthur’s reckless and headstrong nephew, who embarks on a daring quest to confront the eponymous Green Knight, a gigantic emerald-skinned stranger, and tester of men. Gawain contends with ghosts, giants, thieves, and schemers in what becomes a deeper journey to define his character and prove his worth in the eyes of his family and kingdom by facing the ultimate challenger. From visionary filmmaker David Lowery comes a fresh and bold spin on a classic tale from the knights of the round table.