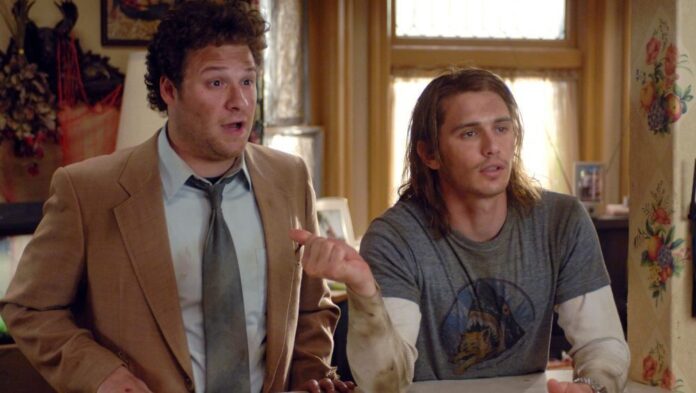 If you’re seeing ALOT of Seth Rogen lately and wondering, “What’s the new movie?”, don’t worry you aren’t alone. Truth is, there is no movie, Rogen is on a publicity tour for his new memoir Year Book which becomes available tomorrow, May 11th. Generally speaking publicity tours are pretty tame, with the same tired questions and answers bouncing back and forth. It seems that, with a memoir, the truths become more readily available. The biggest nugget comes in the arena of one of comedies greatest bromances, Seth’s string of hits with long-time buddy James Franco. During the endless interviews and appearances there’s been a lot of questions surrounding how he feels about the films that made him famous. Rogen worked in the raunchy R-rated comedy department, and in the past 10 years many of the jokes that made him famous would now get him razed on Twitter. The guy with the most famous laugh in the world seemed to regret that his career was tied to this kind of comedy (something I don’t think he should apologize for), these conversations culminated in THE question…what was his relationship with James Franco like following the allegations of sexual misconduct aimed at the actor.

Rogen had the following to say:

“I also look back to that interview in 2018 where I comment that I would keep working with James, and the truth is that I have not and I do not plan to right now,”

Considering that Rogen once backed his buddy publicly I have to imagine that some facts came to light privately causing Rogen to back away. Honestly, Rogen doesn’t seem like the type to worry about being “cancelled”, but he does seem like a guy who wouldn’t support someone he KNEW was doing something wrong.