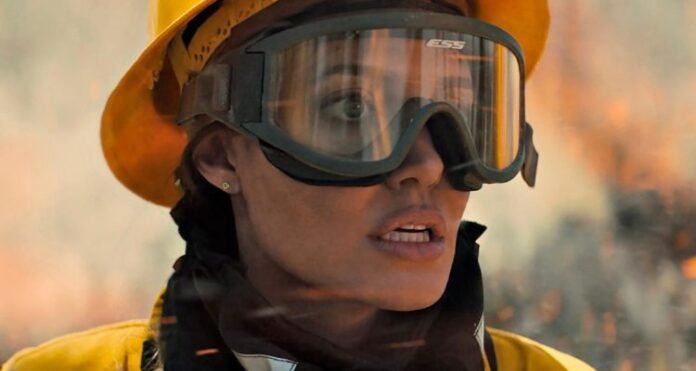 Those Who Wish Me Dead is an old-fashioned star vehicle. It probably wouldn’t exist if it weren’t for star Angelina Jolie, making an increasingly rare appearance in front of the camera rather than behind it. And like so many of those films fronted by a major celeb it is utterly functional as an action thriller, entertaining enough to sustain its 100-minute runtime and not a second beyond.

What’s odd about all of this is that Taylor Sheridan is behind it. The filmmaker who gave us gritty, muscular, deeply-textured films such as Hell or High Water, Wind River, and Sicario has been phoning it in of late, perhaps too busy with his Yellowstone tv series. Not that Those Who Wish Me Dead is a complete abdication of his skills; you still get the same ornery, neo-Western vibe that permeates all of his work (even the recent Without Remorse with Michael B. Jordan), but none of the social richness we’ve come to expect.

Jolie, who has done pretty much everything there is to do as an action heroine, suits up as a daredevil firefighter traumatized by a past wildfire gone wrong. She covers up the scars with a devil-may-care attitude that entertains the dudes on her team, and rankles the local sheriff (Jon Bernthal) who hopes to keep her out of trouble. He fails miserably at this task, and when she’s banished to a lookout station to basically dry out, Hannah stumbles upon Connor (Finn Little), who has just witnessed the murder of his father (Jake Weber) by a pair of shadowy goons looking to cover up a massive conspiracy. To hide their tracks, the killers set the Montana forests ablaze, but it also serves as a makeshift, fiery prison for those looking to get away.

There’s simply not a lot to this film, at least narratively speaking. Chase thrillers don’t get more efficient than this. Hannah and Connor get over their mutual distrust while fleeing their pursuers, learning to lean on one another as the blazing walls close in on them. As the armed predators, Aiden Gillen and Nicholas Hoult exude the appropriate menace and do their fair share of wonton murder along the way, however when certain deaths would be too disturbing, like say killing a key character or his pregnant wife, suddenly they turn into the gang who couldn’t shoot straight. Tyler Perry pops up in this, quite unexpectedly, for a role he probably could’ve hired someone else to do. Why was he in this?

On the other hand, someone like Jolie can make more of her thinly-drawn character than most other actors. It has been a solid decade since Jolie was considered one of the top action stars in the world (yes, Salt was that long ago), but she still has that believable edge. Little is also quite good in depicting Connor’s fear mixed with sheer disbelief at the sudden chaos his life has become, which would be too much for an adult much less a kid. Another standout for me was Medina Senghore as the previously-mentioned pregnant wife, Allison, making sure Hannah isn’t the only woman making these men regret putting so much up in smoke.

Those Who Wish Me Dead is another Warner Bros. film that will open in theatres and HBO Max streaming simultaneously on May 14th. It would be worth a rental under any other circumstance, so if you watch it at home you will be occupied for a while but little of it will be seared into memory.