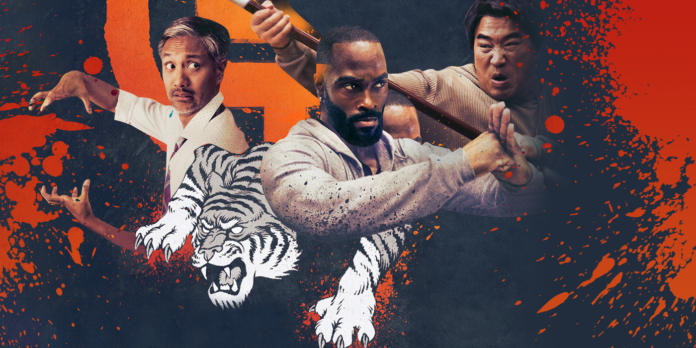 A trio of kung fu masters reunites to avenge the murder of their fallen sensei. It’s the set-up for literally hundreds of martial arts movies, but rarely do they have the heart and humor of The Paper Tigers. Quoc Bao Tran’s directorial debut is not only funny, but it uses the vengeful scenario to tell a lighthearted story of friendship, overcoming the odds, and finding one’s true self. Oh, and it has some pretty sweet action, too. This one’s not to be missed.

Fans of The Karate Kid and Cobra Kai will want to seek out The Paper Tigers because they touch on so many of the same themes. Danny (Alain Uy), Hing (Ron Yuan), and Jim (Mykel Shannon Jenkins) are old friends and students of the legendary Master Sifu Cheng (Roger Yuan). As teens they were pretty hot shit, known as the “Three Tigers” for being Sifu’s best and brightest students. But Danny was the best of them all. Nicknamed “8 Hands”, Danny used to pick on a pathetic rival, Carter (Matthew Page), who talked a good game but couldn’t back it up.

Years later, the guys are estranged, not only from one another but from Sifu. Danny has fallen particularly far; a workaholic who can’t find time for his own son, he also lies to his ex-wife just to keep face. It’s not the way Sifu taught him how to be. But in truth, all Three Tigers have fallen far off the path. When Sifu dies under mysterious circumstances, Hing returns to reunite the trio for the funeral, and to uncover what really happened.

The Paper Tigers doesn’t unfold like your typical revenge kung fu movie.The journey opens up the opportunity for Danny, Hing, and Jim to make amends but also to grow up and make good on their responsibility to Sifu. If they are to truly be worthy of his legacy, they’ll have to fight for it, which is where the humor comes in. These guys are out of shape and as likely to break a hip as throw a kick. A whole new crop of fighters have emerged willing to take their place as the new Tigers, but there’s also a deadly killer out there who could be strong enough to take them all down.

What’s fun about The Paper Tigers is the way it blends comedy into some really unique fight sequences. Each character has their own strengths to bring to the table, which makes each battle different. Danny has maybe fallen the farthest, and his losses are pretty embarrassing as he tries to get back in the groove. Jim retired from kung fu and took up Brazilian jiu-jitsu, and while he looks the most physically imposing, we soon learn that one discipline does not translate to the other. Meanwhile, Hing has grown out of shape and sports a leg brace, but he has skills as a master healer which come in handy for his fights.

“You look like a fat, Asian Mr. Rogers”, Carter tells him, one of many great one-liners that Matthew Page drops. While there’s a ton of comic relief it’s Page who stands out, and makes for a terrific foil as the rightfully pissed-off and arrogant Carter. He enjoys getting a bit of retribution on the guys who tormented him in school, and it shows. But at the same time, he’s respectful of Sifu and kung fu, having built a life dedicated to it, which is a harsh reality the Tigers have to accept.

The Tigers are best when together, and so is the film. As plotting divides them up to deal with individual hurdles, the film begins to lose a lot of its steam. The bad guy they must overcome has an air of danger around him, which is great for the battle to come, but he still comes across as one-dimensional.

Tran stays pretty light on his feet as a filmmaker, deftly switching to a VHS camcorder style during montages of the Tigers growing up, practicing their moves while hip-hop blasts behind them. From a physical standpoint I had a hard time buying that young Jim (played by Gui DaSilva-Greene ) could ever grow up to look like older Jim, but for the most part the casting is really strong all around. All three leads are able to inject so much character into their performances, both in the smaller moments of bonding and into the action.

I’m not going to sit here and pretend The Paper Tigers is especially deep, but it doesn’t need to be. The lessons it teaches about loyalty, honor, and duty are simple ones, told with the care and laughter that punches you right in the feels.