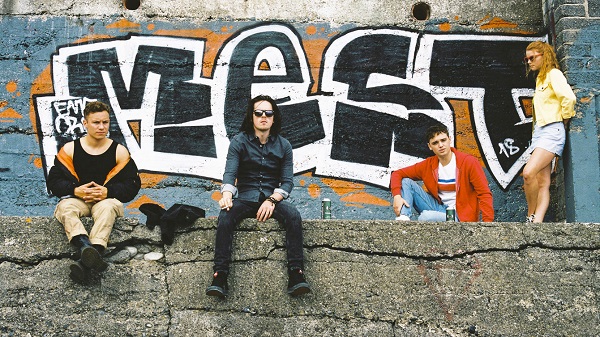 When senior year ends and one graduates, it’s usually the best summer of your life. You have finally made it over that hurdle of the last little bit of high school and are ready to take the world on by storm. Whether that be going to college, trade school, or get a job, for that summer before you have to start making big life decisions, it’s the last moment of you feeling completely invincible. So naturally, you get with your buddies and are ready to tear a new one all summer long. Well, that’s kinda what happens in Here Are The Young Men, but it gets rather dark.

Matthew (Dean-Charles Chapman), Joseph (Finn Cole), and Rez (Ferdia Walsh-Peelo) are best buds in Dublin, who after they graduate high school are ready to let loose some steam. It’s clear Joseph is not only the alpha, but also the one who gets into the most trouble as he convinces everyone to destroy their teacher’s car as they are vandalizing their school on their last day. Poor Mr. Landerton (Ralph Ineson) watches them do it after pleading with Matthew to make the right decision as they then run away consequence-free. And so begins the summer. The boys aimlessly hang out together, drinking, and even have Matthew’s friend Jen (Anya Taylor-Joy) tag along with them as the voice of reason.

Unfortunately, everything changes for them after they happen to witness a horrible auto accident that results in the death of a child. For these 3 guys, they have not really seen anything in their lives that deals with life and death, and definitely not right in front of them. Such a thing fundamentally changes them in different ways. Matthew grows closer with Jen and she provides support and comfort for him. Things aren’t as good for Joseph and Rez though, as they have difficulty processing the grief and PTSD after what they witnessed. A lot of drinking and drug use happens. Rez suffers through depression and suicidal thoughts and Joseph’s rage starts to outwardly manifest itself. While Matthew is the least touched of them, their behavior begins to affect him as well as he wants to be their friend, but they are going down different paths.

Things take a real c-change when Joseph goes to America because he wants to be an “alpha male” and be more like how he perceives Americans to be. Here Are The Young Men dips into weird surrealism as Joseph has a talk show fantasy as he interacts with a TV show host (Travis Fimmel) who is defining what a mane “should” be, and it’s all the characteristics of toxic masculinity. When Joseph comes back to Dublin, he’s abusing the homeless and overly aggressive with women (as he attempts drunken rapes more than once). Seeing a young child die has instead made him have less apathy, to the point that he helps orchestrate torture and abuse of a homeless man (Emmett J. Scanlan) in Dublin and even pulls Matthew into it, helping divide their friendship even more.

While a movie delves into the “one last summer” troupe of coming-of-age films rather well, the final act causes Here Are The Young Men to fall flat on its face. The film seems to drift further and further into darker territory more for the sake of shock value instead of to serve the story. By the end of the film (which connects to the opening shot), these guys’ lives have been forever changed for the worse, but it doesn’t seem well earned in the way the film presents itself. Dean-Charles Chapman and Finn Cole give great performances, Anna Taylor-Joy doesn’t have much to do in the film other than play Matthew’s girlfriend and try to pull him back from the edge. If director Eoin Macken tried to be a little more grounded and less experimental (the TV talk show bits didn’t work well at all and were rather distracting), Here Are The Young Men might have worked a little better.

Here Are The Young Men is currently available on VOD.