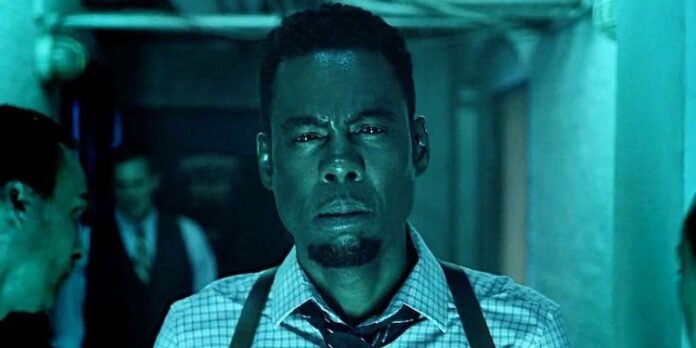 Don’t be fooled by Spiral: From the Book of Saw; its use of big stars like Chris Rock (who developed the “story”) and Samuel L. Jackson and seeming connection to the torture porn franchise nine movies long is a trap as gruesome as any the Jigsaw conceived. For any ties to the previous films is tenuous at best, as frequent director Darren Lynn Bousman and co. seek to entice a new audience with the lure of amazingly torturous contraptions and better acting! On paper, anyway. Star power doesn’t lead to jack shit in this bland and surprisingly dull rehash that, one movie in, already feels dead on arrival.

Let’s get one thing clear: I’m actually quite the Saw fan. I’ve seen every movie, some more than once, and anyone who reads this site is aware how appreciative I am for its faithfulness to continuity. What they were able to accomplish over so many chapters, rebuilding and expanding on the Jigsaw’s twisted games of morality and murder by switching perspectives, never got the deserved credit. Spiral pretty much ignores all of that, with the exception of one or two slim references, this is an entirely new story that sticks closer to the lousy crime thrillers of the ’90s and ’00s, almost all of which dealt in corrupt cops. Timely, this is not.

Rock, grimacing through an awful cop act that’s like Pookie meets Sipowicz, plays Det. Ezekiel Banks. The son of a legendary police chief (Jackson), Ezekiel is persona non grata at the station for ratting on another of the boys in blue. When an apparent Jigsaw copycat strikes at another police officer with typically gory and ironic fashion, Ezekiel must not only find the killer before he kills again, but watch his own back for fear someone will put a bullet in it.

What novices to the Saw movies may not realize is that victims tend to be getting what they deserve, and die in ways that parallel their crimes. There are very few innocents to be found anywhere, and in the case of Spiral the killer is going after corrupt cops. While the movie makes pains to pretend this is something new, it DEFINITELY is not as Jigsaw went after police all of the time. Anyway, the first trap is the most inventive and will turn the stomach, as a lying officer is forced to choose between ripping out his own tongue or getting hit by an oncoming train. Every contraption tears, shreds, or sears the flesh, making them all a little tough to watch, but none are especially creative by Saw standards.

Ezekiel has few allies, with the exception being his police chief (Marisol Nichols) and unwanted partner, rookie detective William Schenk (Max Minghella), an admirer of Ezekiel’s father. William is such a good, earnest egg that we know something awful is going to happen to him, or there’s something he’s hiding. The screenplay doesn’t serve him very well, through everything that he endures along the way.

Spiral feels formulaic, but not for a Saw movie but for an episode of Criminal Minds. By making this more of a police procedural it has lost the one thing that made this franchise unique, which is the wild murder machines and unique punishments. Rock, who often goes on comedic riffs that I’m sure are just bits from his stand-up act, does nothing that makes him any more of a disposable character than the dozens of others who have passed through this franchise. Jackson is barely in the movie at all. He might’ve done this during his lunch break from The Hitman’s Wife’s Bodyguard or something.  On the plus side, Rock’s attempts at humor do lighten the mood somewhat, which I’m guessing is a play to attract casual moviegoers.

It used to be that Saw would use over-the-top violence to tackle current social issues, not too different from what The Purge films do now. But with Spiral, the cause is…dirty cops? *yawn*  Of all the things that could have been done to attack the issue of police corruption, especially right now, Spiral chooses the path that is the most like a relic from yesteryear, and so isn’t impactful in the least.

Spiral: From the Book of Saw opens May 14th.