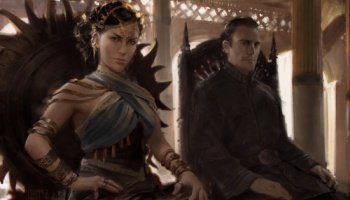 HBO is moving forward with another of its many Game of Thrones spinoffs, this one titled 10,000 Ships, and already has a writer in place for it. Deadline reports Person of Interest writer Amanda Segel will pen the stories which take place about 1,000 years before events in the main series.

10,000 Ships will center on Princess Nymeria, a warrior who flees Essos along with the surviving Rhoynars and heads to Dorne. Upon arriving, she burns the accompanying ships so that nobody can escape their new island home. It’s there that she impresses the influential Martell clan and marries into their family, helping to build them into one of Westeros’ most powerful kingdoms.

Fans of the show and George R.R. Martin’s A Song of Fire and Ice will recognize Nymeria as the name Arya Stark gave to her dire wolf in season one.

This is one of many Game of Thrones spinoffs in the works at HBO, the furthest along being House of the Dragon which tells an early story of the Targaryen dynasty. Martin had a hand in co-creating that series, but it’s unclear what his role will be with 10,000 Ships. All you probably need to know is that he’s more of a TV guy now than an author who has a book to finish writing, so I hope you’re not still waiting on that.