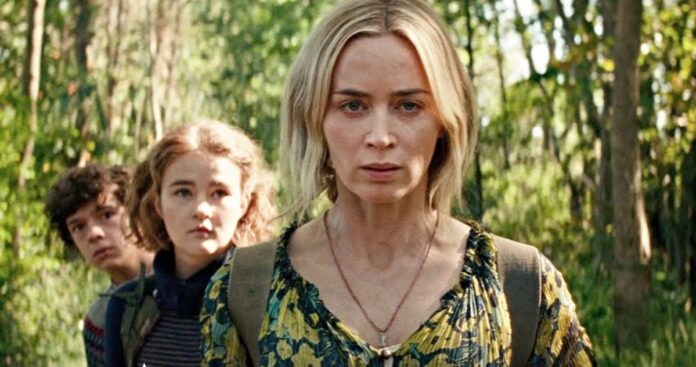 You may have waited through an entire pandemic to watch A Quiet Place Part II but Paramount has decided to be generous and shower us with content. The studio not only released the film’s final trailer yesterday but additional four clips to get you in the horror mood.

For those needing a refresher the first film focused on a family surviving in the woods after mysterious creatures who hunt using sound invade earth. Emily Blunt, John Krasinski, Noah Jupe, and Millicent Simmonds will reprise their roles while Cillian Murphy and Djimon Hounsou join the cast. Krasinski once again directs based off he wrote with Scott Beck and Bryan Woods. Here is the official synopsis of the new film before we dive into the new clips:

Following the deadly events at home, the Abbott family must now face the terrors of the outside world as they continue their fight for survival in silence. Forced to venture into the unknown, they quickly realize that the creatures that hunt by sound are not the only threats that lurk beyond the sand path.

If you were worried about the lack of “on-screen John Krasinski” since his character died in the last movie, don’t worry. As the first clip indicates, there are flashbacks.

In another flashback we see Emily Blunt’s Evelyn and a younger version of Noah Jupe’s character driving through town when the creatures attack. Things don’t go as planned.

The third clip takes place in the present when Evelyn and her kids cross through a fence and into what is clearly someone else’s property. Alarms are sounded.

In the final clip we are finally introduced to Cillian Murphy’s character, ironically wearing a mask. He intercepts the Abbott’s before a creature enters the frame.

You can catch A Quiet Place Part II in theaters May 28.