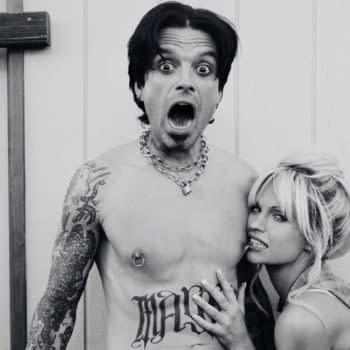 Only Sebastian Stan can say he’s the right guy to play both a young Luke Skywalker, and MÖTLEY CRÜE member Tommy Lee. A few months after we learned Stan would be starring alongside Lily James in Hulu’s Pam & Tommy series, about the infamous celebrity couple, we have our first look at them and they are, in a word: Perfect.

Here’s a peek at Pam & Tommy, coming to @Hulu. Based on the true scandal that started it all, featuring Lily James, Sebastian Stan and @SethRogen… ready to rewind? #PamAndTommy pic.twitter.com/4ctdKYEm9F

James, in particular, is virtually unrecognizable as the Baywatch and Barb Wire babe. But don’t sleep on Stan, who is clearly having nipple-piercing fun as Lee.

The six-episode series will center on the notorious sex tape that brought the issue of celebrity and privacy rights to the national discussion. I would say it was also the birthplace of Internet celebrity, and gave rise to a whole host of people who got famous simply for being in sex tapes that were largely seen online.

New ‘What If…?’ Clip Shows Steve Rogers As A New Kind Of Super Soldier