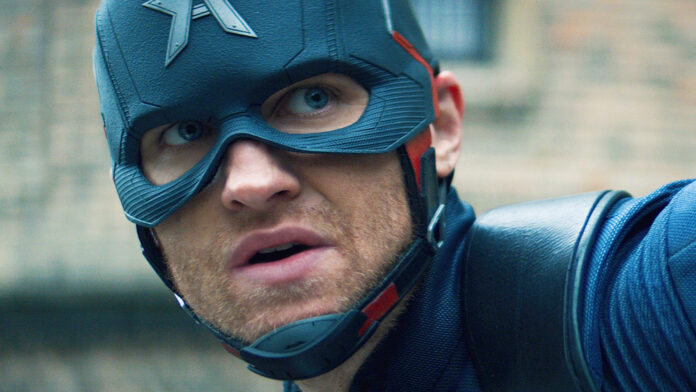 The Falcon And The Winter Soldier may be his first Marvel project, but Wyatt Russell knows how to keep spoilers a secret. In a new interview with BBC Radio 1’s Ali Plumb, Wyatt was asked if he ever met his predecessor, Chris Evans.

Keeping coy, Russell responded with “I think I have,” making sure not to look at the camera. “I don’t think I’ve ‘shook his hand’ met him, but I think I’ve walked by him somewhere and made eye contact. That counts as being a stalker, that doesn’t count as meeting anybody. But, I guess it would.”

He could have left the subject there, but he brought the conversation back to The Falcon and The Winter Soldier. “You just gotta wait until the end of the series and then everybody will be like, ‘Oh, wow.’”

Does this mean we may see Chris Evans back in the MCU, even for a second? Maybe. The show’s creator Malcolm Spellman recently said that episode 5 is his favorite. “Hands down, [episode] five, it just gets real. And five, you’re going to cry.” He also mentioned to Rotten Tomatoes that the episode 5 cameo would be a “grounded character.”

So will Chris Hemsworth’s Thor or Chris Evan’s Steve Rogers joined Bucky and Sam in the next few episodes of The Falcon And The Winter Soldier? We’ll have to wait and see when episode 5 premieres tomorrow on DisneyPlus.