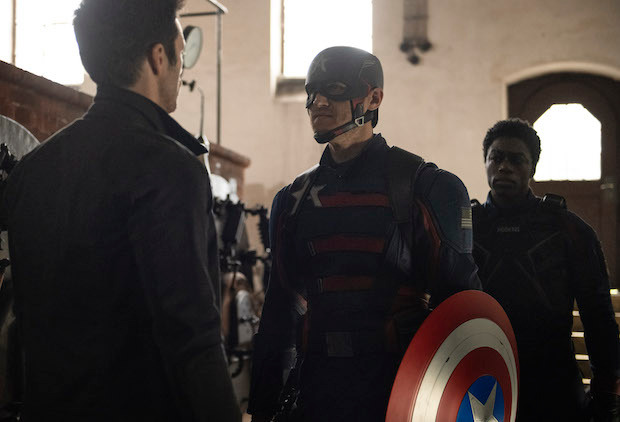 We’re past the halfway point in Falcon and the Winter Soldier. I know, ALREADY? Yep, the six-episode series is winding down, which means things are about to get nuts. And according to showrunner Marcus Spellman in an interview conducted last month, it all starts next week with episode five…

“Hands down, five, it just gets real,” Spellman told ComicBook.com. “And five, you’re going to cry.”

Cry? Uh oh, that sounds like someone is taking a dirt nap. Or it could involve a character Spellman told Rotten Tomatoes that would be making a super secret cameo in episode five. And look, I know what you’re thinking: Didn’t Paul Bettany trick us with this “cameo” nonsense during WandaVision?  Well, yeah, he did, but Spellman doesn’t seem to be pulling any tricks. The character won’t be an Avenger we’ve previously seen, so there go hopes that it’s Black Panther (considering Ayo of the Dora Milajae is hanging around, it was on people’s minds) or Black Widow, or even Steve Rogers.

According to Slashfilm‘s sources, this character is one that we’ve never seen in the MCU before, is played by a well-known actor, and is not in line to be in an upcoming film. That knocks out anybody from the Fantastic Four, I guess, but does leave open the possibility of any X-Men.

I mean, we HAVE been to Madripoor, right? Don’t tell me you didn’t think Wolverine right away because I know you did.

Here’s the episode five synopsis, which tells us nothing:  All eyes are on the shield, as Sam Wilson aka The Falcon, and Bucky Barnes aka The Winter Soldier decide to team up—or rather, work together—when a new global threat launches them into an unexpected mission that may hit too close to home