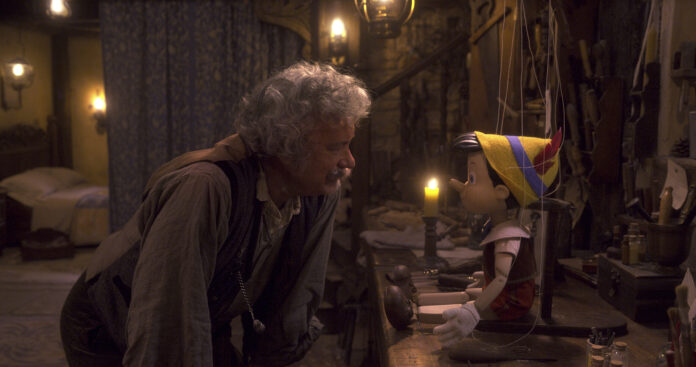 It was inevitable that Disney would eventually get around to a Pinocchio remake. It’s one of their classic animated films and they have spared nothing to redo them in live-action style for a new generation. This morning saw the debut teaser for Robert Zemeckis’ Pinocchio film, so if last night you wished upon a star for exactly this thing, your wish has come true.

The footage reveals Tom Hanks, sporting white hair and a bushy mustache, as lonely woodcarver Gepetto, as he wishes upon a star for a son. And what do you know? His wish is fulfilled, with Benjamin Evan Ainsworth (The Haunting of Bly Manor) voicing the titular puppet. Also in the voice cast are Joseph Gordon-Levitt as Jiminy Cricket, Keegan-Michael Key as “Honest” John, and Lorraine Bracco as Sofia the Seagull. Cynthia Erivo plays the Blue Fairy, with Luke Evans as The Coachman.

Zemeckis, who is still living off his early classics like Back to the Future and Forrest Gump, directed and co-wrote the script with Chris Weitz. Frankly, given the subpar work he’s been doing for the better part of 20 years, it’s tough to get excited for this. But there’s always hope that Zemeckis will recapture old glory and there’s enough talent here, plus a story everyone loves, that he might just do it.

This Pinocchio is very different from the stop-motion film being put together by Guillermo Del Toro, which is sure to have a darker edge.

Pinocchio will stream to Disney+ on September 8th.