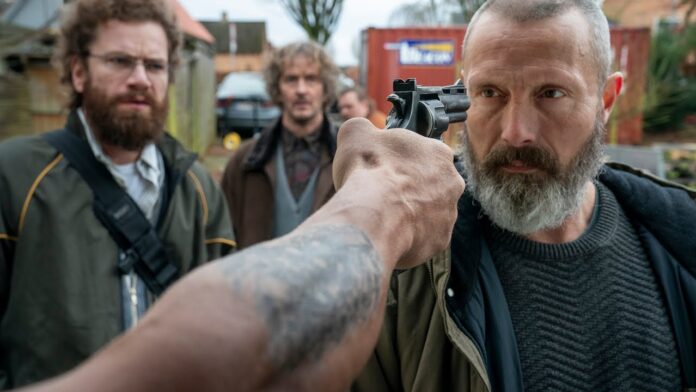 This is turning out to be quite a Mads Mikkelsen day. Following news the Danish actor has joined the Indiana Jones 5 cast, now comes a new trailer for his upcoming revenge film, Riders of Justice, which has a bit of a darkly comic edge to it.

The film is directed by Anders Thomas Jensen, who previously worked with Mikkelsen on Men & Chicken, another dark comedy affair. Riders of Justice stars Mikkelsen as a deployed man who returns home after his wife is killed in a train accident, only to learn from a survivor that it may have been planned to off a witness in the trial of a motorcycle gang leader. Mikkelsen’s character sets off to avenge his dead wife by killing everyone involved.

Jensen may not be a big name, and hasn’t gained the kind of stateside notoriety that some other Danish filmmakers have, but he’s been keeping busy on some big projects of late. He wrote Nicolaj Coster-Waldau in the excellent drama A Second Chance, and also penned 2017’s The Dark Tower (which was awful, but hey).

Riders of Justice beat out the Oscar-nominated Another Round (also with Mikkelsen) at the Danish box office, an impressive feat.  The film arrives in select theaters on May 14th and everywhere May 21st.

RIDERS OF JUSTICE follows recently-deployed Markus, who is forced to return home to care for his teenage daughter after his wife is killed in a tragic train accident. But when a survivor of the wrecked train surfaces claiming foul play, Markus begins to suspect his wife was murdered and embarks on a revenge-fueled mission to find those responsible.