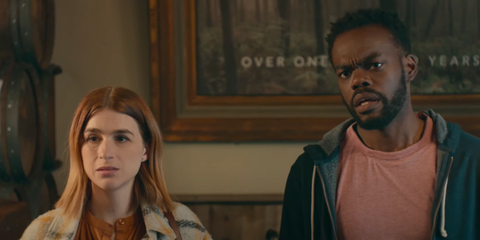 Unlike most things from middle school, Jeff Rosenberg and Laura Jacqmin’s relationship was built to last. After meeting in childhood and working on each other’s plays, they grew up and moved to Hollywood where Rosenberg worked on NBC’s The Good Place and Jacqmin wrote for Grace and Frankie.

Now the duo are releasing their first movie together as co-writers, with Rosenberg directing and Jacqmin producing. Starring Aya Cash (Scare Me, The Boys) and William Jackson Harper (The Good Place, Midsommar), We Broke Up centers on a longtime couple who break up the day before a family wedding and try to act like nothing happened.

Rosenberg first conceived the break-up comedy idea back in 2012 and quickly knew his childhood friend would be perfect to help him write it. I sat down with Rosenberg and Jacqmin to discuss their collaboration, the joke the other person wrote they wish they’d written, and the magic of their strong supporting cast.

Watch our interview below. We Broke Up is On Demand this Friday, April 23rd.