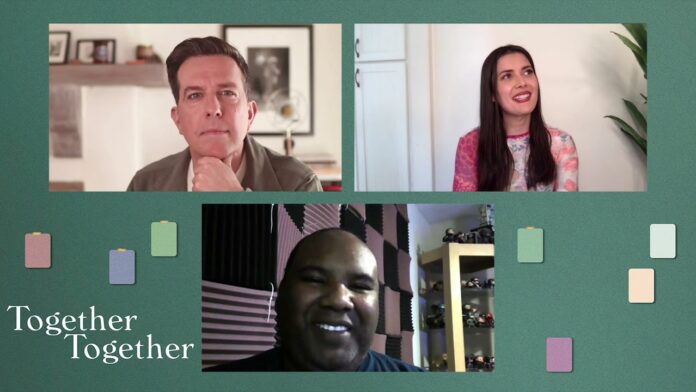 I had no idea what I was in for when sitting down to watch Nikole Beckwith’s Together Together at this year’s virtual Sundance Film Festival. Beckwith’s first film at the festival since Stockholm, Pennsylvania six years ago, her followup is completely different and yet shows her continued ability to subvert expectations. The film stars Ed Helms and comedian Patti Harrison, and centers on a single, middle-aged man who wants to have a child. In what sounds like a perfect, traditional rom-com setup, he hires a younger woman as surrogate.

What unfolds is a story that you think will be a familiar romantic-comedy, but is anything but that. Their relationship grows by leaps and bounds, changing the way we look at true, pure platonic love. And yes, it’s also very funny. How could it not be with Helms and Harrison exploring something we’ve never seen before on the big screen; the male biological clock?

I had the chance to speak with Ed Helms and Patti Harrison about Together Together, what drew them to the project, and how they forged such incredible chemistry.

Together Together opens this Friday, April 23rd. You can check out my early review here and the interview below!