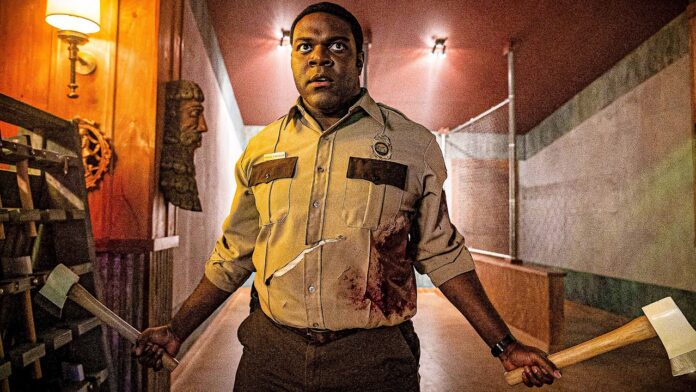 Announced as part of the upcoming Tribeca Film Festival lineup, Josh Ruben’s Werewolves Within had my attention long before that. It’s an adaptation of the popular Ubisoft video game which basically follows the Among Us model, except you’re deducing who is the werewolf among the medieval townsfolk. It’s a fun setup that should make for a helluva movie, and Ruben, who directed the horror-comedy Scare Me, seems like the right guy for it.

The first trailer for Werewolves Within features a cast of comedic actors to go along with the funny premise. Sam Richardson (Veep), Milana Vayntrub (Other Space, those AT&T commercials), Michaela Watkins (Brittany Runs a Marathon), and more star with Ruben directing from a script by Mishna Wolff that replaces the fantasy setting for a small-town. Ruben talks about that change and what it means in his director statement:

“I grew up near the same small town where we shot Werewolves Within. As a kid, I’d freak myself out, making up monster stories, running through the woods, pretending I was Chief Brody, fighting creatures in the brush (I LOVED Jaws — hell, I loved horror). That hometown experience, where neighbors knew your business (whether you liked it or not), is so much of what makes Werewolves so personal. But, as much as I love horror movies, nothing scares me more than people. And as much as this movie is an homage to my love for Hot Fuzz, the Coen Brothers, and Arachnophobia, it’s also about the monster in all of us.”

SYNOPSIS: After a proposed gas pipeline creates divisions within the small town of Beaverfield, and a snowstorm traps its residents together inside the local inn, newly arrived forest ranger FINN (Sam Richardson), and postal worker CECILY (Milana Vayntrub) must try to keep the peace and uncover the truth behind a mysterious creature that has begun terrorizing the community.

Werewolves Within is one of the Tribeca films that already has distribution and a release date, arriving on June 25th in theaters and VOD on July 2nd.