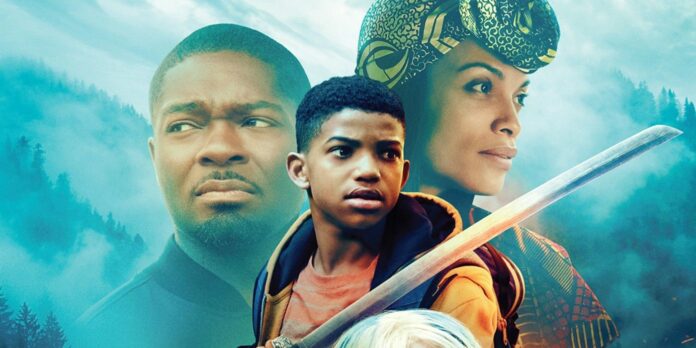 Considering the wealth of amazing dramatic performances we’ve seen from David Oyelowo over the years, you might expect his directorial debut to be much the same. But the refined actor has chosen something we haven’t seen a lot from him, which is an Amblin-esque fantasy tale in The Water Man, produced by his good friend Oprah Winfrey.

Oyelowo also stars in the film alongside Lonnie Chavis, Rosario Dawson, Maria Bello, Amiah Miller, and Alfred Molina. The story follows a boy who seeks to help his sick mother by finding the key to immortality, kept by a mythical figure known as the Water Man.

The script is by Emma Needell, who has worked on various projects but is now making her feature writing debut. Not bad catching the eyes of folks like Oyelowo and Winfrey.

The Water Man opens on May 7th, having made its world premiere at TIFF just last year.

Gunner (Lonnie Chavis) sets out on a quest to save his ill mother (Rosario Dawson) by searching for a mythic figure who possesses the secret to immortality, the Water Man. After enlisting the help of a mysterious local girl, Jo (Amiah Miller), they journey together into the remote Wild Horse forest — but the deeper they venture, the stranger and more dangerous the forest becomes. Their only hope for rescue is Gunner’s father (David Oyelowo), who will stop at nothing to find them.

‘A Lot Of Nothing’ Trailer: Racial Tensions Run High In New Thriller From Exec-Producer David Oyelowo