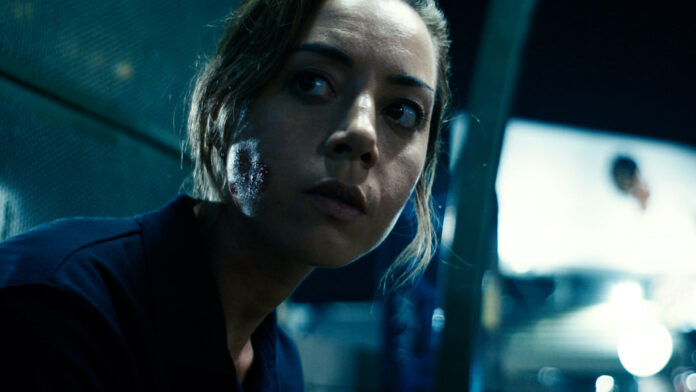 *NOTE: A version of this review was originally part of our Sundance Film Festival coverage.*

Aubrey Plaza isn’t who I would think of as a dangerous, working class Scarface, but after John Patton Ford’s effectively tense Emily the Criminal, I see her in a whole new light. The film, described appropriately by its title, stars Plaza as woman just trying to cobble together enough rent to survive in Los Angeles. This is harder than it looks, with her low-paying food delivery job (which her boss says makes her “independent contractor”, thus benefit-less) and whatever else she can muster out of the gig economy. It’s barely enough to survive in a system that seems designed to crush anyone whose lived a less-than-perfect life.

And that is definitely Emily. What we pick up about her early on is that she’s extremely defensive about her past. A promising art career was skuttled by an assault charge years earlier, and that’s also hurt her job prospects. In interviews, she’s hesitant to bring it up, the angry expectation of judgment plastered like a mask all over her face. But things seem to turn around when an act of kindness nets her a chance to make an easy $200 for an hour’s work. Emily takes a gamble on it, and enters into the underworld of credit card fraud scams. Buy expensive goods using fraudulent credit, then sell the items on the black market. Easy money.

This brings her into the orbit of Youcef (Theo Rossi, really great), who runs this shady business operation like some underground CEO. While there are more menacing figures lurking, Youcef is all about the money and getting the jobs done right. He takes Emily under his wing after the first simple job goes well. Then he offers her something more difficult worth 10x as much. That one, which finds Emily literally fighting off a man to escape and returning bloody, but successful, shows where Ford is going with all of this. Emily might be a scammer, she might be a criminal, but first and foremost she’s a survivor. She’s just trying to get by long enough to land a real job at an ad agency, one that her friend Liz (Megalyn Echikunwoke) keeps dangling. However, that turns out to also be a game run by a different kind of exploitative system.

With Emily the Criminal, Ford puts a human face on the underclass and the desperate acts they are driven to. Shot with a similarly natural, expose style as Joshua Marston’s Maria Full of Grace, the film feels like you are watching something that has been going on unseen right under your nose. It’s also shockingly violent at times, although there’s a lack of gunplay or gore. In keeping with its street-level roots, box cutters and tasers are weapons to be feared and when employed they are deadly.

This is a role unlike any we’ve seen from Plaza. Her Emily is cold, determined, and menacing, especially when others try to take advantage (and Heaven forbid you try to steal her friend’s pup). I think Plaza may have found a new calling in roles that show her in a much darker light, or in positions of authority. She’s that damn good. While Emily the Criminal may skip some narrative beats as Emily builds her own operation and gets closer to Youcef, it keeps you glued right from the start, rooting for the villain to create a system of her own.