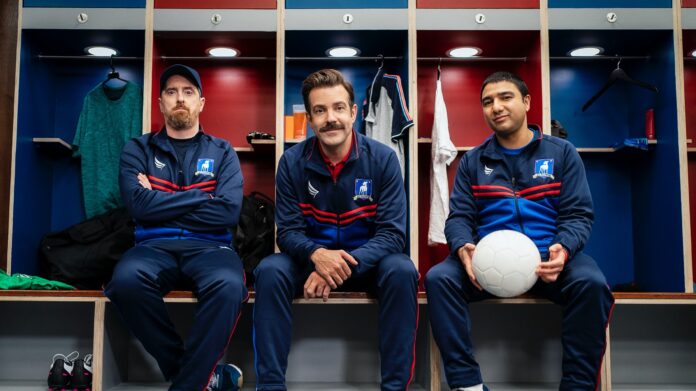 The Diamond Dogs are back. Apple just released the season 2 teaser of Ted Lasso, the beloved television comedy following the titular midwestern football coach as he tries to coach a professional British soccer team. The show, which premiered on Apple TV Plus last August and has won Golden Globes, SAG, and Critics Choice Awards, has slowly won an audience through its silly humor, dynamic characters and kind message.

So what should we expect out of AFC Richmond in season 2?

When we last left Ted (Jason Sudeikis) and the rest of the Greyhounds, they had just been demoted from the Premiere league after a devastating loss. “I don’t care what our record is. It’s all about believing that everything is gonna work out in the end exactly as its supposed to,” Ted tells the team in the new trailer.

While those words are nice, it may not be enough to shake AFC Richmond from their funk. Newcomer Sarah Niles is cast as the team’s sport psychologist and its looking like the crew may need some therapy. It was hinted last season that veteran player Roy Kent (Brett Goldstein) would retire after a sports injury in the season’s final match. Brett Goldstein is spotted multiple times in the trailer sans AFC Richmond jersey. Up and coming player Sam Obisanya (Toheeb Jimoh) may be transferring to a different team. As assistant coach Nate (Nick Mohammed) says, “The team is just a little unlucky.”

What is lucky is that the show is set to return to Apple TV+ sooner than expected – July 23. Hannah Waddingham, Brendan Hunt, Jeremy Swift, Phil Dunster, Juno Temple also join Sudeikis Goldstein, Mohammed, Niles, and Jimoh for the penultimate season.

You can catch the first season of Ted Lasso on Apple TV+ now to prepare yourself for July 23rd.