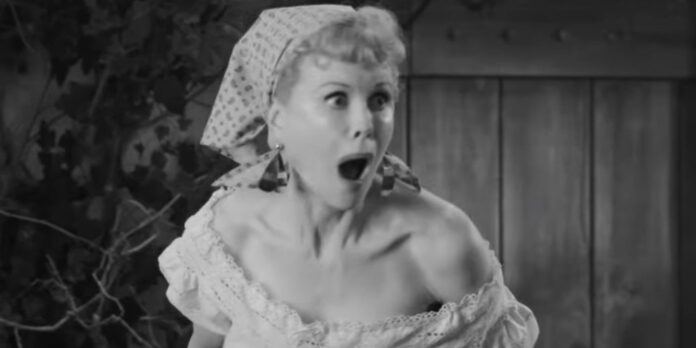 There are only a few major films left that are expected to be major awards contenders, and Aaron Sorkin’s Being the Ricardos is one. However, judging from the reaction I’ve seen from colleagues over the last few days, there’s quite a lot of skepticism about the film, with most of it centering around the casting of Nicole Kidman as Lucille Ball and Javier Bardem as her husband, Desi Arnaz.

Neither Kidman or Bardem looks like a natural fit for their roles as the powerhouse comedy couple, who struggle with their personal and professional lives during a week of production on the I Love Lucy set. But even if everything about the film isn’t perfect, we know Sorkin’s script is going to be something special. Also in the cast are Jake Lacy, J.K. Simmons, Nina Arianda, Tony Hale, and Alia Shawkat.

This marks Sorkin’s third directorial effort following Molly’s Game and last year’s The Trial of the Chicago 7. Sorkin has made himself a factor during this critical time on the movie calendar, and we’ll find out if Being the Ricardos is going for gold when it hits theaters on December 10th, followed by Amazon Prime Video on December 21st.

Lucille Ball (Nicole Kidman) and Desi Arnaz (Javier Bardem) are threatened by shocking personal accusations, a political smear, and cultural taboos in Academy Award®-winning writer and director Aaron Sorkin’s behind-the-scenes drama Being the Ricardos. A revealing glimpse of the couple’s complex romantic and professional relationship, the film takes audiences into the writers’ room, onto the soundstage, and behind closed doors with Ball and Arnaz during one critical production week of their groundbreaking sitcom I Love Lucy. Featuring J.K. Simmons and Nina Arianda.